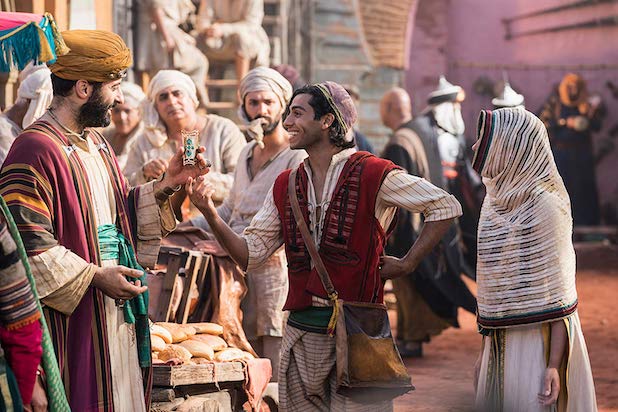 “Aladdin,” Disney’s live-action remake of the 1992 animated classic, earned $7 million in its Thursday box office previews. It headlines the four-day, Memorial Day weekend on over 4,400 screens.

Disney is projecting the family fantasy film to earn between $75-85 million in its opening weekend, with independent trackers saying it could be as low as $65 million. That’s in part because social media buzz for the film has been disappointing following early looks at Will Smith’s Genie and other clips. Critics, however, while split, said that the early negative attention was overblown and that the film is better than the initial marketing gave it credit.

“Aladdin” is one of three Disney live-action remakes in 2019, with “The Lion King” arriving later this summer and “Dumbo” already released at the end of March. “Dumbo” earned $2.6 million in its Thursday previews and made $45.9 million in its opening weekend. “Aladdin” is wishing for more than that, but it likely won’t come close to the highs set by “Beauty and the Beast,” which made $16.3 million at Thursday previews and opened to a then-record $174 million in March.

More likely, “Aladdin” is trying to match the total set by another Memorial Day Disney release, “Pirates of the Caribbean: Dead Men Tell No Tales,” from 2017. It opened to $78.5 million over the four day weekend after earning $5.5 million at the Thursday box office. For other comps, Disney’s “Maleficent” made $4.2 million on Thursday and had a three-day opening of $69 million. “Detective Pikachu” opened to $54 million over three days a few weeks ago after earning $5.7 million on Thursday.

“Aladdin” is based on the animated film that tells the story of a homeless thief and “street rat” named Aladdin who falls in love with a princess named Jasmine. When he’s tasked by the evil Jafar to find an ancient, magic lamp, Aladdin discovers and befriends a Genie and is given three wishes that help him to win over Jasmine. The original animated film made $504 million at the worldwide box office in 1992.

“Booksmart” will open on over 2,500 screens and is being released by Annapurna Pictures and United Artists, and it made $875,000 in its Thursday previews.

The film is tracking in the mid-to-high single digits over the three-day weekend and could get as high as $12 million over the full holiday. Kaitlyn Dever and Beanie Feldstein star as two ambitious, straight-A high school students who go on a bender on their last day of school when they realize they haven’t actually lived a day.

The comedy premiered at SXSW and has a 99% score on Rotten Tomatoes. Jessica Williams, Lisa Kudrow, Will Forte, Jason Sudeikis and Billie Lourd co-star in the raunchy comedy that’s being called the next “Superbad.”

And finally, “Brightburn,” an R-rated, superhero horror film from Sony’s Screen Gems and The H Collective, earned $950,000 in its Thursday box office previews from 2,257 locations. It opens on approximately 2,605 screens this weekend.

The studio is projecting a $10 million four-day opening and independent trackers have it pegged between $12-16 million on the back of a $6 million budget.

“Brightburn” is produced by “Guardians of the Galaxy” director James Gunn and is directed by David Yarovesky about a baby boy who crash lands on Earth in a small town in Kansas from an alien planet. But instead of becoming Superman, he turns evil and turns on the friends and family who raised him. Elizabeth Banks, David Denman, Jackson A. Dunn, Matt Jones and Meredith Hagner star.