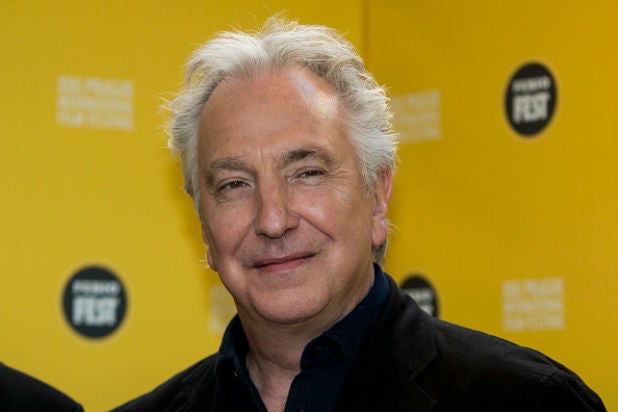 Alan Rickman, the British film and theater veteran, died on Thursday. He was 69.

Rickman’s family confirmed the news in a statement. It read, “The actor and director Alan Rickman has died from cancer at the age of 69. He was surrounded by family and friends,” per the BBC.

Born in 1946, Rickman went to college to study graphic design but decided after several years in that profession to pursue acting. He attended the Royal Academy of Dramatic Arts and, after graduation, found work in various theater companies throughout the UK.

His biggest stage role came in 1985 when he landed the male lead in the Royal Shakespeare Company’s production of “Les Liaisons Dangereuses.” When the production moved to Broadway in 1987, Rickman was nominated for a Tony Award for his performance.

However, when the play was adapted into the 1988 film “Dangerous Liaisons,” Rickman was not asked to reprise his role, losing out to John Malkovich.

Rickman’s big break in front of American film audiences did come in 1988, however, when he played the villainous German thief Hans Gruber opposite Bruce Willis‘ John McClane in the action classic “Die Hard.”

His career skyrocketed after that, with his dry British sensibility often leading to him being cast as villains, as in the 1991 film “Robin Hood: Prince of Thieves” as the Sheriff of Nottingham, which earned him a BAFTA Award that same year. Rickman also played Jamie in the film adaptation of “Truly, Madly, Deeply,” a role he had previously played on the stage.

Rickman was adept at comedy as well drama, playing memorable comedic roles in films like Kevin Smith‘s 1999 divine comedy “Dogma” and in the 1999 “Star Trek” spoof “Galaxy Quest.” He also voiced a depressed robot in the 2005 film adaptation of “Hitchhiker’s Guide to the Galaxy.”

Rickman became well known to young audiences when he was cast as Professor Severus Snape in the “Harry Potter” franchise. The films were a monstrous international success, with the eight movies grossing almost $7.8 billion worldwide in total.

Also Read: Natalie Cole, 'This Will Be' Singer, Dead at 65

Rickman also appeared in several recent Tim Burton-led projects, playing Judge Turpin in Burton’s 2007 film adaptation of “Sweeney Todd” opposite Johnny Depp and Helena Bonham Carter. He also played Absolem the Caterpillar in Burton’s 2010 version of “Alice in Wonderland.” He will reprise that role in the upcoming sequel “Alice Through the Looking Glass.”

Rickman also worked behind the scenes, directing several plays and the films “The Winter Guest” and “A Little Chaos,” both of which he also wrote.

Rickman had been with his partner Rima Horton since 1965. Yet despite being together for decades, the two did not officially marry until 2012 in a secret ceremony in New York, Rickman admitted in April 2015.

He is sadly the latest world renowned British entertainer to die in the past week, with David Bowie having died Sunday, also at the age of 69 after a battle with cancer.