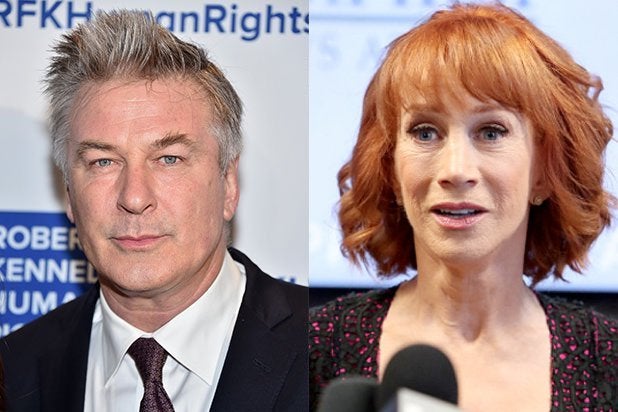 Alec Baldwin, a survivor of public scorn and a notorious liberal, has shared some encouraging words with embattled comedian Kathy Griffin. Because Alec Baldwin.

Griffin is at the center of national outrage after photos surfaced of her holding what appeared to be the severed, bloody head of President Donald Trump. Fever from the right reached such a pitch that Griffin retained legal counsel and held a press conference to address the matter this week.

“Kathy….baby…I’ve been there,” Baldwin tweeted late Friday night. “The whole Henry Hyde thing w Conan, where we bring out an oxygen mask at the end?”

Baldwin is referring to a bonkers 1998 appearance on Conan O’Brien’s late night show, where he delivered an explosive rant against Rep. Henry Hyde — the late politician from Illinois who spearheaded the judiciary committee to impeach President Bill Clinton during the Monica Lewinsky scandal.

In the sketch, which concludes with O’Brien strapping an oxygen mask on Baldwin, the actor imagines U.S. citizens marching on Washington to “stone Henry Hyde to death, then we’d go to their homes and kill their wives and children.”

So, yeah, Baldwin has been here before.

“A joke. That’s what I thought. That’s what we intended. No one walked out of the studio and said, ‘No! We’re serious!'” Baldwin continued in his tweet. “But all your gutless, weasels in the GOP insisted that I actually threatened Hyde. They played the victim beautifully.”

The “Boss Baby” star finished with a rousing call of “f–k them. F–k them all. No 1 believes u meant 2 threaten Trump. Trump is such a senile idiot, all he has is Twitter fights.”

Griffin has lost everything from TV gigs and tour dates to endorsement deals over the photos, and claims the president is flexing an unprecedented use of power to personally destroy her.

“If you don’t stand up, you get run over,” Griffin said at her press conference. “What’s happening to me has never happened in this great country. A sitting president of the U.S. … is personally trying to ruin my life forever.”

Read on for Baldwin’s tweets and, below that, watch a (low, low quality) clip of his Henry Hyde rant:

Kathy….baby…I've been there.
The whole Henry Hyde thing w Conan, where we bring out an oxygen mask at the end?

2- a joke. That's what I thought. That's what we intended. No one walked out of the studio and said, "No! We're serious!"
No one.

3- but all your gutless, weasels in the GOP insisted that I actually threatened Hyde. They played the victim beautifully.

4- Kathy…fuck them. Fuck them all. No 1 believes u meant 2 threaten Trump. Trump is such a senile idiot, all he has is Twitter fights.

5- ignore him. Like the leaders of all the other countries in the world. Ignore him.