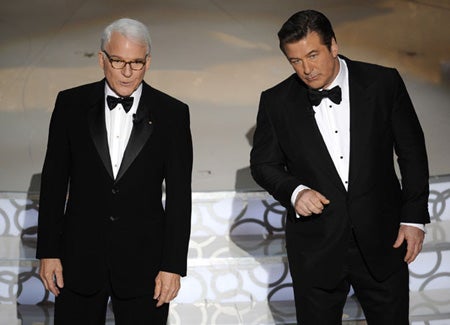 Alec Baldwin — fresh off a generally well-received co-hosting performance with Steve Martin at the Oscars — has lined up another public speaking engagement: the “30 Rock” star will deliver the commencement address for New York University’s 2010 class.

The ceremony is slated for May 12.

"We expect that the honorees will be received by the graduates and guests at commencement not merely with the respect and courtesy they deserve for their accomplishments, but with real enthusiasm," NYU spokesman John Beckman said. "The choice of Mr. Baldwin as the host of this year’s Academy Awards and his selection as the recipient of an honorary degree from NYU are not related, other than that both are recognitions of his talent as an actor.”

As is the case with any celebrity commencement, there are already some haters.

"I question what the point of him speaking is," Dante Wadley, an NYU senior majoring in Killjoy, told NYU News. "I would rather have someone who would have something inspirational to say. He’s not someone who I would have chosen."

Commenter Matt Glick had better points: "Total joke! Alec Baldwin will have nothing of value to say. Out of a city as diverse as New York, with multitudes of celebrities living in close proximity to NYU the best they could do was him? Let’s remember, this is the guy who left a voicemail for his teenage daughter about how worthless she was only a few years ago."

I think Baldwin is a fine choice, although for my tuition, the celebrity speaker that oughta be most in-demand this spring is Conan O’Brien, who delivered one of the greatest commencement speeches ever at his alma mater, Harvard, in 2000.