Alec Baldwin teased an upcoming interview he’s planning to conduct with Woody Allen on Instagram Live – and made it fairly clear that the questions would not be of the hard-hitting variety.

Baldwin announced the Tuesday sit-down on his own Instagram over the weekend. Looking slightly disheveled and speaking hesitantly, it was also clear from his caption that the embattled “Rust” actor knew making content with his old friend was going to raise online eyebrows.

“Let me preface this by stating that I have ZERO INTEREST in anyone’s judgments and sanctimonious posts here. I am OBVIOUSLY someone who has my own set of beliefs and COULD NOT CARE LESS about anyone else’s speculation. If you believe that a trial should be conducted by way of an HBO documentary, that’s your issue.” 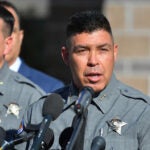 Baldwin appeared to be referencing the HBO Max documentary “Allen vs. Farrow,” which highlights allegations that the “Midnight in Paris” filmmaker abused his young daughter. Baldwin is facing his own reputational firestorm after the movie-set shooting last year that killed a cinematographer and is still under investigation.

Baldwin played it coy in the beginning of his short video, revealing his interview subject by flashing Allen’s book cover.

“This coming Tuesday … the 28th. The 28th, I think. … I’m going to be doing an Instagram Live with,” he said, showing the book, before whispering: “Woody Allen. Who I love. I love you buddy.”