Alec Baldwin will make a public appearance in the wake of the “Rust” tragedy as the master of ceremonies for an awards ceremony in New York City on Thursday.

His appearance, which comes days after his emotional sit-down interview with ABC News discussing the “Rust” tragedy last week, will come as host of the 2021 Ripple of Hope Award Gala, which is put on by the Robert F. Kennedy Human Rights organization and gives awards for human rights work.

The awards gala is set for Thursday at the New York Hilton Midtown Manhattan Hotel. Some of the honorees include Stacey Abrams, José E. Feliciano and Amanda Gorman, according to the organization’s website. Kamala Harris is also set alongside Baldwin as the event’s keynote speaker. 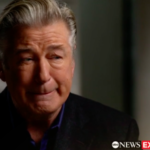 Some attendees are set to appear virtually through Zoom, but Baldwin is expected to attend in person and emcee the night.

Baldwin also faces civil lawsuits for his role as a producer on “Rust.” He held the gun that was fired on set of the film in New Mexico on Oct. 21, killing Hutchins and injuring the film’s director Joel Souza. In his interview, he stressed that he did not pull the trigger of the gun but that he let go of the hammer and it went off. No criminal charges have been filed in the case.