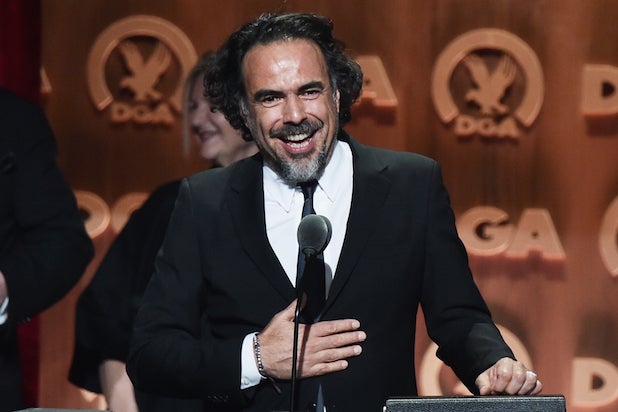 Alejandro G. Inarritu has been named the best director of 2015 for “The Revenant” by the Directors Guild of America, adding yet another wrinkle into a wild Oscar race.

Inarritu’s victory made him the first director to ever win back-to-back Directors Guild Awards, following a victory last year for “Birdman.” It also means that three different movies have won the first three major guild awards: “The Big Short” won the Producers Guild, “Spotlight” took the Screen Actors Guild’s ensemble award and now “The Revenant” has won with the directors.

With “The Revenant” not nominated for next week’s Writers Guild Awards and “The Big Short” and “Spotlight” favored to win in the WGA’s adapted and original categories, respectively, all three films will no doubt take a fighting chance into Oscar weekend.

“Big Short” and “Spotlight” are presumably fighting over the same bloc of voters, which might give the bigger, bolder and more muscular “Revenant” a small edge — but the preferential system used by the Academy to count Best Picture ballots makes vote-splitting less of a threat than conventional winner-take-all systems, so the victor may be the film that shows up in the No. 2 or 3 spot on the largest number of ballots.

Regardless of what happens with Best Picture, though, Inarritu is now the clear favorite for the Best Director Oscar, which has gone to the DGA winner all but seven times in 67 years. And “The Revenant,” which also figures to produce the Best Actor winner in Leonardo DiCaprio, is a formidable contender to be the last film standing.

The win also dealt a real blow to George Miller‘s “Mad Max: Fury Road,” which once seemed to be a potential Best Picture winner but will now go into the Oscars without winning a single major guild award.

In the last 20 years, no film has won Best Picture without winning at least one major guild award — though only Clint Eastwood‘s “Million Dollar Baby” has won with just a DGA Award.

Although all of the nominees seemingly went into the DGA show with a fighting chance to win, Inarritu appeared genuinely surprised by his victory. He came close to tears during when talking about his late father during his acceptance speech, and shook his head when TheWrap spoke to him after his win.

In other feature-film awards, Matthew Heineman was named best director of a documentary for “Cartel Land” in an upset over Asif Kapadia for “Amy.”

A new award for the best first-time feature director went to Alex Garland for “Ex Machina,” who won over a field that included Laszlo Nemes for “Son of Saul.”

Television honors went to the drama series “Game of Thrones,” the comedy series “Veep” and the TV movie “Bessie.”

In the Variety/Talk/News/Sports categories, the winners were the “Saturday Night Live” 40th anniversary special and Jimmy Fallon‘s “Tonight Show.”

The DGA nominations, with winners indicated by *WINNER: