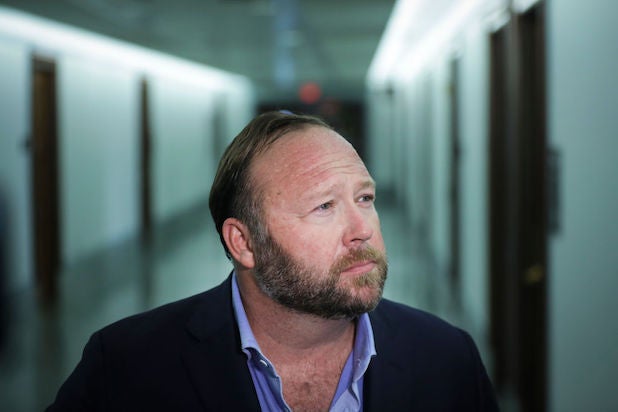 In court papers filed Monday, attorneys representing Sandy Hook families in their lawsuit against him said that child pornography was identified in discovery materials provided by Jones. The filing also accuses Jones of threatening one of the attorneys.

Jones has adamantly denied any knowledge of the pornographic materials, and says that unnamed individuals are trying to frame him. He has also denied making any threats.

In the filing, the families’ attorneys said that consultants recently “identified an image that appeared to be child pornography” in metadata turned over by Jones on May 21. The attorneys said they immediately contacted the FBI and turned over all the related metadata. The FBI subsequently said it identified several other instances of child pornography “which had apparently been sent to Infowars email addresses.”

In the video, Jones also called out Chris Mattei, one of the lawyers representing the Sandy Hook families, by name.

The court filing characterizes Jones’ comments as a threat, but Jones’ lawyer, Norm Pattis, said in a separate filing Monday that during the June 16 episode of his show, Jones apologized to Mattei, and said, “I’m not saying that the lawyers for the Sandy Hook families set me up or did this.”

The family attorneys say they “intend to move to seek specific relief on an expedited basis,” and are requesting that the presiding judge review the video “at the earliest possible moment.” The matter will be addressed during a previously scheduled hearing on Tuesday.