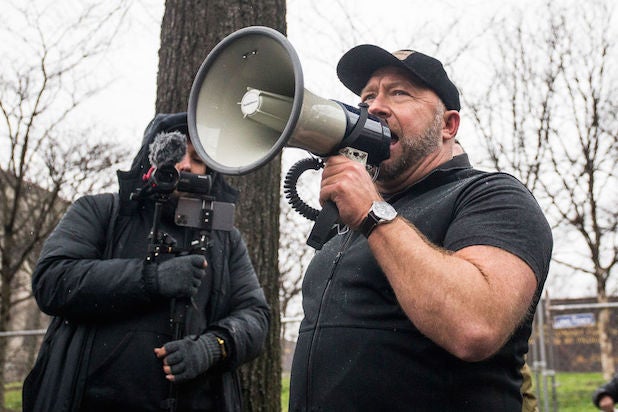 Digital shock jock Alex Jones made an unlikely appearance at the Women’s March in Washington, D.C. on Saturday, donning a pink beanie while walking around shouting “Down With Trump!” from a megaphone.

A brief clip of Jones at the march was shared by the New York Post’s Jon Levine on Twitter, which you can check out below. Jones is seen repeatedly pumping his fist and yelling the phrase before eventually jumping around with a few poncho-wearing marchers.

The “InfoWars” head honcho was unable to share the video himself on Twitter because he’s been banned since 2018 for “abusive behavior.” Jones was later kicked off Facebook last year.

Jones was likely yelling “Down With Trump!” and trolling many of the marchers who are not huge fans of the president. Trump appeared on Jones’ show in 2015, and Jones has sung the president’s praises several times since then. His tune changed a bit during an appearance on The Joe Rogan Experience last year, with Jones saying “I don’t dislike Donald Trump” but that he hates how the president “became my identity.”

Thousands turned out for the D.C. march on Saturday, with many women explicitly saying their opposition to President Trump spurred them to join the rally. “No one is less mad now,” one marcher, who also attended the first march in 2017, told The Washington Post. “We might be a bit more tired, but we are certainly no less angry and our opinions haven’t changed.”