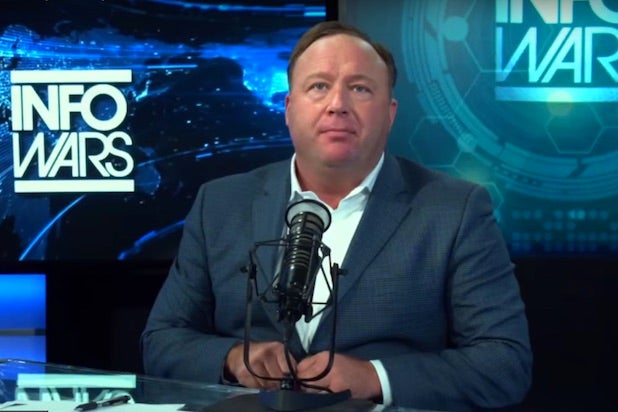 No fake news here — Alex Jones has been hit with two lawsuits by parents of children killed in the Sandy Hook Elementary School shooting who say Jones’ InfoWars defamed them.

InfoWars has fueled a conspiracy theory that the Sandy Hook shooting was a “false flag” to build up opposition to guns. Sandy Hook shooter Adam Lanza killed 20 children and six adults in the December 2012 attack.

One lawsuit, filed by Leonard Pozner and Veronique De La Rosa, alleges that De La Rosa was falsely accused of taking part in a bogus interview in a 2017 InfoWars report.

“This case arises out of accusations made by InfoWars in 2017, including the false claim that Plaintiff Veronique De La Rose was an actor in a faked interview with CNN’s Anderson Cooper used to cover up the ‘truth’ about Sandy Hook, as well as other statements meant to support the underlying accusation that the Sandy Hook parents are liars and frauds,” the suit reads. “This conspiracy theory, which has been pushed by InfoWars and Mr. Jones since the day of the shooting, alleges that the Sandy Hook massacre did not happen, or that it was staged by the government and concealed using actors, and that the parents of the victims are participants in a horrifying cover-up.”

Saying that Jones’ assertion that De La Rosa “participated in a faked blue-screen interview from a remote location is manifestly false,” the suit adds that by “making renewed accusations about the Plaintiffs in 2017, InfoWars breathed new life into this conspiracy and caused intense emotional anguish and despair.”

A second suit, filed by Sandy Hook father Neil Heslin, takes issue with “accusations by InfoWars in the summer of 2017 that Plaintiff was lying about whether he actually held his son’s body and observed a bullet hole in his head. This heartless and vile act of defamation re-ignited the Sandy Hook ‘false flag’ conspiracy and tore open the emotional wounds that Plaintiff has tried so desperately to heal.”

Both suits allege defamation and seek more than $1 million in damages.

InfoWars did not immediately respond to a request for comment from TheWrap.