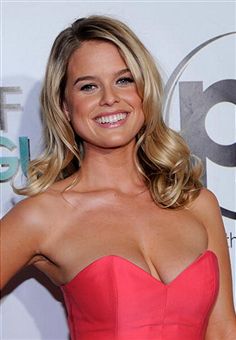 She might be out of my league but she’s right in Steve Rogers’ wheelhouse.

"She’s Out of My League" star Alice Eve is now the front-runner to play Peggy Carter, an American fighter with the French Resistance who becomes the title character’s girlfriend in Marvel’s "Captain America" movie, reports E! Online.

Hayley Atwell ("Cassandra’s Dream") has also been revealed as a contender for the part, with both actresses having been screen-tested twice in London.

Emily Blunt and Keira Knightley were previously mentioned to be in the running for the sure-to-be-thankless role. After all, love interests in superhero movies are rarely more than simple storytelling devices designed to give the male protagonist a personal stake in whatever he’s fighting against. That said, it’s possible Peggy Carter will have more to do than the average damsel in distress, considering she’s a fighter who’s not afraid to throw down in the name of life, liberty and justice for all.

Eve can currently be seen on the cover of Maxim magazine and will soon have tongues wagging with an upcoming GQ pictorial. She plays Charlotte’s nanny in "Sex and the City 2" next month and previously appeared in "Starter for 10" and "Crossing Over." As for Atwell, she’s been rumored to star in a Broadway revival of "Born Yesterday" opposite Chris Noth.