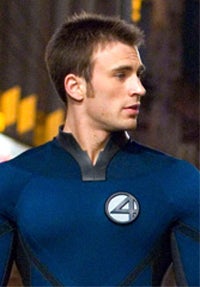 (Update 2 p.m. PST: Emily Blunt has officially passed on Marvel’s offer to play Captain America’s girlfriend Peggy Carter, reports the L.A. Times. Keira Knightley and Alice Eve are the other actresses who have been rumored for the role.)

Thanks for telling us!

More than a week after the news broke that Chris Evans would be donning spandex for a return trip to the Marvel universe, the studio officially confirmed what everyone already knew — Evans will play the title role in "The First Avenger: Captain America."

Evans has previously played another Marvel hero, the Human Torch, in two "Fantastic Four" movies. He has reportedly signed an nine picture deal, which will see him playing Cap in future sequels and "Avengers" films. Captain America’s first adventure is currently scheduled to hit theaters on July 22, 2011.

So unsurprising was the news that most media outfits had already moved on to another "Captain America" casting scoop. Sebastian Stan ("Gossip Girls") will play Cap’s sidekick Bucky Barnes, the Hollywood Reporter reports.

Most of the major roles in the superhero film have now been cast. Hugo Weaving has reportedly been cast as the villain Red Skull. The only big part yet to fill is Cap’s love interest, which is rumored to be attracting interest from Keira Knightley and Emily Blunt.