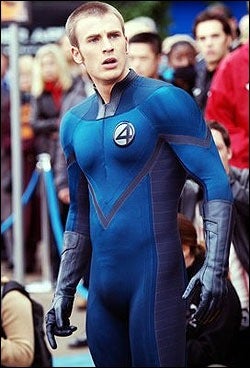 Chris Evans has been offered the role of Captain America, according to the Hollywood Reporter.

TheWrap spoke to the actor’s representation at CAA who refused to confirm or deny the story, as did Marvel.

Evans is best known for playing The Human Torch in "Fantastic Four" and its sequel.

I wrote about Marvel’s casting crisis surrounding the ‘Captain America’ movie earlier this week, and Evans was one of the candidates I endorsed for the role.

Evans just wrapped the indie drama "Puncture" and will next star in "What’s Your Number?" opposite Anna Faris. That project would likely be put in jeopardy if Evans decides to take Marvel up on their offer, since the "Captain America" deal comes with nine options.

Evans has enjoyed a successful career starring in ensemble-driven movies such as "Push," "The Perfect Score," "Sunshine" and the "Fantastic Four" films, as well as the upcoming WB action movie "The Losers," so and the time may have finally come for him to lead a franchise of his own.