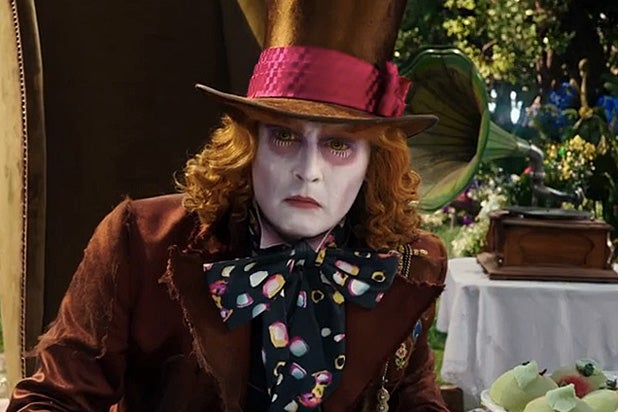 “Alice Through the Looking Glass” has all The Playing Cards stacked against it as the Disney sequel seeks to hold onto its head through Memorial Day weekend.

Heading into its domestic debut, the outlook already didn’t look great for the film as critics lambasted it and early tracking set it up for a weak debut. But when news broke of domestic abuse charges filed against star Johnny Depp — just days before “Alice” opened in theaters — the timing couldn’t have been worse.

The film brought in an estimated $28.1 million through Sunday, making it an all out bomb.

It had been tracking to debut at around $70 million, once Monday’s holiday numbers come in. The studio, however, predicted a more conservative $60 million to $63 million. But now, with the weekend’s weak returns, onlookers are saying that Disney will be lucky to make $40 million.

That would be only a third of the $116 million the original, “Alice in Wonderland,” made when it opened in 2010.

While the abuse scandal can’t help, experts say audiences simply aren’t responding to the movie itself.

“The personal life drama or controversies of the talent involved [in a film] — no matter how unfortunate — historically has had no discernible or measurable effect on box office,” Paul Dergarabedian, senior analyst at ComScore, told TheWrap. “Generally, audiences base their moviegoing decisions on its inherent appeal and the effectiveness of the marketing campaign.”

One example of a film flourishing in spite of a scandal is “X-Men: Days of Future Past,” which made $110.6 million when it debuted in 2014 — while director Bryan Singer was fending off sexual assault allegations. (Charges against him were eventually dismissed.)

“I personally don’t think that the allegations against Depp hurt the movie, more his social perception,” an industry insider told TheWrap. “It was just a slow weekend all around.”

Depp has always had trouble bringing in box office dollars, noted Jeff Bock, senior analyst at Exhibitor Relations. “Outside of ‘Pirates of the Caribbean’ and his collaborations with Tim Burton, Johnny Depp has always had a tough go at the box office,” he told TheWrap. “What really hurt ‘Alice Through the Looking Glass’ was the fact that Disney thought it had a summer blockbuster instead of what it really was — a spring fling.”

There is one possible bright spot for Depp, though. His ex, Vanessa Paradis, has reportedly penned a letter in his defense after the movie star’s wife, Amber Heard, made the allegations. “In all these years I have known Johnny he has never been physically abusive with me and this looks nothing like the man I lived with for 14 wonderful years,” the letter reads.