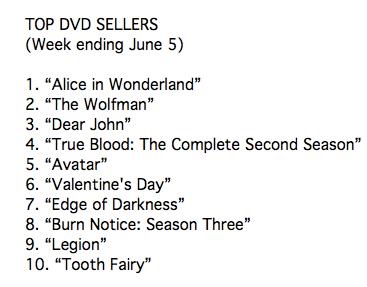 DVD sales and rentals got sucked down the rabbit hole.

In its first week of release, Tim Burton’s "Alice in Wonderland" topped the sales charts, but had to settle for second place on the the rental end, according to Rentrak data.

"The Wolfman," Benicio Del Toro’s reboot of the famous horror franchise, was first on the rental charts in its premiere week. The Universal film disappointed at the box office but sold the second-most discs last week.

Still going strong in its seventh week, "Avatar" came in at fifth place on the sales chart. But Na’vi love did not extend to the rental charts, with James Cameron’s epic slippi 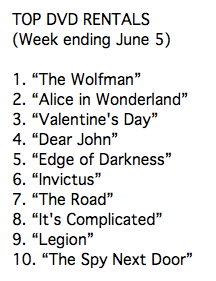 This week sees the debut of box office hit "Shutter Island," the umpteenth Scorsese/DiCaprio collaboration, as well as the distinctly lesser light "From Paris with Love."