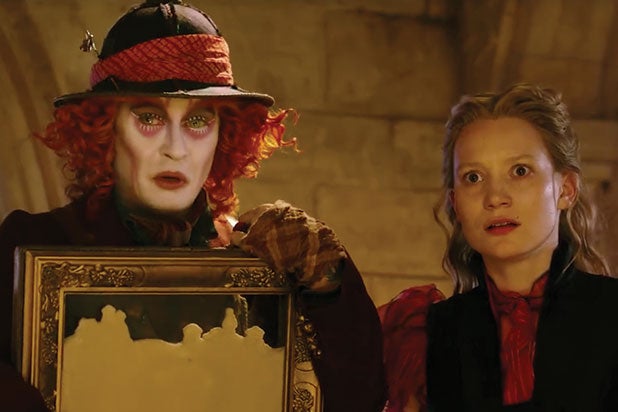 A new TV spot for “Alice Through the Looking Glass” has been released, and time is of the essence in the sequel.

“When the day becomes the night, when the sky becomes the sea, when the clock strikes heavy and there’s no time for tea,” says the voiceover. “And in the darkest hour, before my final rhyme, she will come back home to Wonderland and turn back the hands of time.”

The star-studded cast of Mia Wasikowska, Johnny Depp, Sacha Baron Cohen, Anne Hathaway and Helena Bonham Carter are all visible in the trailer.

In the new film, after spending five years following in her father’s footsteps and sailing the seas, Alice Kingsleigh (Wasikowska) returns to London only to wind up back in the whimsical world of Underland. She reunites with the White Rabbit (voiced by Michael Sheen), Absolem (voiced by Alan Rickman) and the Cheshire Cat (voiced by Stephen Fry), as well as the Mad Hatter, who has lost his Muchness.

Mirana (Hathaway) sends Alice on a journey to borrow the Chronosphere, a metallic globe inside the chamber of the Grand Clock. Alice meets old friends and foes as she travels back in time, and also encounters new people, like Zanik Hightopp (Rhys Ifans), the Mad Hatter’s father and even Time himself (Sacha Baron Cohen).

Bonham Carter, Matt Lucas and Timothy Spall also return to the franchise, which is directed by James Bobin, written by Linda Woolverton and produced by Tim Burton.

“Alice Through the Looking Glass” is set to be released by Walt Disney Pictures on May 27.

“She will come back home to Wonderland and turn back the hands of time.” Watch the brand new look at Alice Through The Looking Glass in theaters May 27!