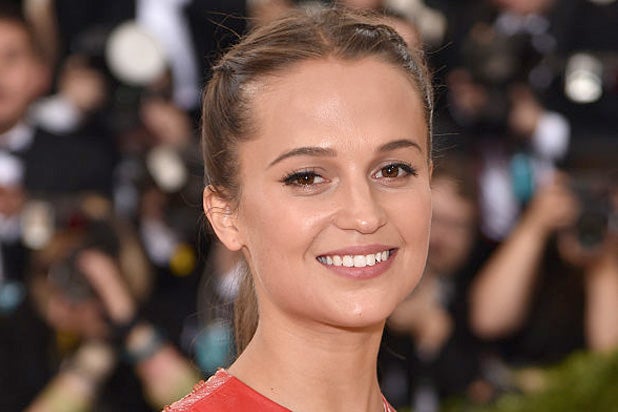 “I didn’t know what true art was until i saw Alicia Vikander as Lara Croft,” wrote another.

In April, the Oscar winner was cast as Lara Croft in the reboot. Norwegian filmmaker Roar Uthaug (“The Wave”) is directing the action-adventure movie, which is based on the popular Eidos video games that have sold more than 35 million units worldwide. Dominic West and Walton Goggins also star.

The film will take a different path from two previous “Tomb Raider” films, which starred Angelina Jolie as Lara Croft and Jon Voight as her father. Vikander’s portrayal of Croft will be in the spirit of the video game series’ 2013 reboot, which also focused on Lara Croft’s origins and her first adventure as an archaeologist.

However, as soon as the on-set paparazzi photos shot on location in South Africa started going viral, there were inevitably a handful of haters not happy with Vikander’s casting.

Alicia Vikander just doesnt have any charisma to play Lara Croft, doesnt even look like a Lara Croft… Felicity Jones would of been great.

I dont want Alicia Vikander to be Lara Croft ☹️

See positive reactions to the photos below.

I woke up and got pictures of Alicia Vikander as Lara Croft doing all her own stunts. I loved being blessed pic.twitter.com/0N75zXQItG

Alicia Vikander as Lara Croft?? How did I miss this news? I'm excited. What about you? ~jm https://t.co/OY9m4Q1Zyn

@thekatiewilson Alicia Vikander on set of Tomb Raider! She looks perfect for the role of Lara Croft! pic.twitter.com/MKlDQilLch

I didn't know what true art was until i saw Alicia Vikander as Lara Croft pic.twitter.com/X3RllSUWlL

ALICIA VIKANDER AS LARA CROFT SIGN ME TF UP

ALICIA VIKANDER AS LARA CROFT IS TREATING ME SO GOOD pic.twitter.com/U2Ehssx4dI

look at alicia vikander trending ww fucking shit up as lara croft YAS IM SO HERE FOR IT!!!