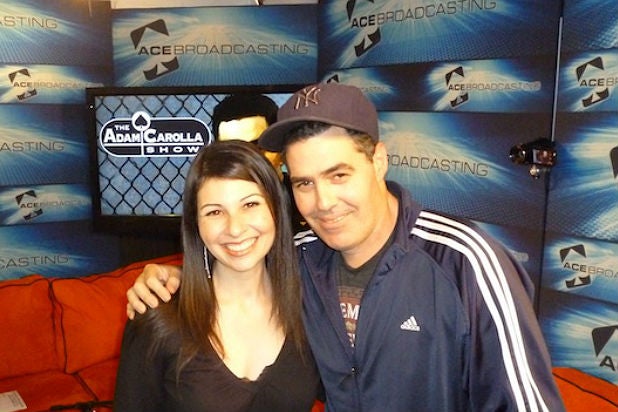 Alison Rosen finally provided her account of the events that led to her dismissal from “The Adam Carolla Show” on Saturday and she says it came down to what most male-female breakups do: miscommunication.

During a special Saturday episode of the “Alison Rosen Is Your New Best Friend” podcast, host Rosen blamed a lawsuit fundraiser and a flap over cross promotion for her ouster. She says she felt compelled to come forward with her side of the story after comments made by Carolla on his show.

“He says he did this because he owed his audience the truth, but he apparently didn’t feel he owed me a conversation where he told me why I was being fired,” Rosen said of Carolla.

Recounting the means by which she was informed of her dismissal — via e-mail — Rosen said Carolla “praises my professionalism and work ethic, but says that it’s just that I’ve been cast in the wrong role and that ‘sidekick’ isn’t playing to my strength.” That contradicts the account Rosen says Carolla spun to his listeners after the fact, in which “he painted a portrait of me as not a team player, not supportive, not grateful, just out for herself.”

Rosen says the terms of her termination initially allowed for her to continue collaborating with other “Carolla Show” regulars, including Matt Fondiler, Chris Laxamana, Caelan Biehn and ARIYNBF producer Gary Smith. But “after appearing on my show,” Rosen said, “the guys received a strongly-worded e-mail telling them their jobs were at stake if they continued to have anything to do with me.”

Among the stated reasons Rosen says Carolla claims he fired her were her refusal to contribute to a legal defense fund against a patent troll and reluctance to place “Carolla Show” indicia on her podcast profile in iTunes. Rosen went on to explain her financial arrangement with Carolla, which involved a salary for her role on “The Adam Carolla Show” and a split of revenues from her own podcast. The Patent Troll Legal Defense Fund required replacing the Amazon banner that ordinarily appears on her website with a new one directing users to the fund.

“My income was the Amazon money after [Carolla] takes his cut (which she said was almost half), my podcast money after he takes his cut (also about half) and my salary from ‘The Adam Carolla Show,'” Rosen said. “The idea of giving away a couple thousand dollars a month for the immediate future, but with the potential to stretch into forever — because, at this point … it wasn’t clear … when it was going to stop … it was just taking a couple-thousand-dollar-a-month … pay cut.”

She said she approached Carolla concerning her dilemma, which also included an impending surgical procedure the following month, and was told she wouldn’t be required to contribute to the fund.

But Rosen said Carolla mischaracterized her reaction, claiming she was defiant about not contributing to the fund. “What it makes me realize is that’s what he heard, but that’s so not what I said,” Rosen continued. “At one point, I asked Gary, “What’s up?” and he said the perception from Adam is, ‘(Joe) Rogan, (Marc) Maron and Nerdist are doing it, but she’s too big to do it?’ I was like, ‘It’s the exact opposite; I’m too small to do it’ … and Gary was like, ‘You’re absolutely right, but it’s Adam.'”

Rosen said her efforts at compromise and even eventual capitulation in swapping the banner and including the “Carolla Show” iTunes imagery are facts absent from Carolla’s characterization of events. “I do believe he was misinterpreting my behavior, and I do believe he was misremembering the facts to fit this narrative,” Rosen said.

Her husband Daniel  — as sidekick during the podcast — then described what he characterized as poor treatment during Rosen’s time on “The Adam Carolla Show,” stating that the environment, composed entirely of men, failed to look after her. “You were asked to go out into a sea of drunk dudes after a show to sign autographs, and no one ever offered to escort you. Ever … I was worried about you sometimes because, frankly, there were some cities where you had stalkers.”

“I didn’t feel comfortable asking for any sort of special treatment,” Rosen said. “I didn’t want to ever be perceived as a diva, so I asked for nothing. But I also didn’t feel safe.”

The criticism of the “Carolla Show” didn’t end there.

Daniel went on to recount, as a one-time fan of Carolla, his first time backstage at the show and “being struck by how every single person who worked for him, they were like scared dogs at a pound.”

“If that place were a greenhouse, all of the plants would be dead,” Rosen piled on. She concluded with a message of optimism and one final jab at her former employer.

“Hopefully that’s behind us,” she said. “Hopefully there’s something people can learn from all of this. Something I’ve taken from it is, when delivering what could be bad news, I try to do it in person.”