"All My Children" icon David Canary is leaving Pine Valley, retiring after nearly 27 years on the ABC soap opera.

There’s been buzz about his pending departure for months, with soap opera publications already predicting his exit. But ABC didn’t make it official until Tuesday.

“My career on ‘All My Children’ has given me more than words could ever convey, both professionally and personally. I have cherished each and every moment," Canary said via a press release. "I would like to thank all the fans who have tuned in throughout the years. Their love and support has meant the world to me."

In true soap fashion, Canary said he’d still appear on the show from time to time. 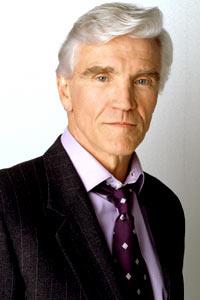 "I will be back to check up on the Chandler clan," he said.

Canary joined "AMC" in 1983; the series premiered in 1970. No firm date for his departure has been announced, although ABC said his episodes would run through April.

As for his exit as a regular, ABC said to "expect a scandalous end to his marriage to Annie (Melissa Claire Egan) and a reunion with one of his former ex-wives. In true standing with ‘All My Children’ history, the aftermath of his departure will leave a fight for power within the Chandler household."

Canary’s departure is the latest blow to the soaps world. "Guiding Light" wrapped last year and CBS has announced plans to kill "As the World Turns" later this year. Big stars such as Canary have had to take pay cuts in order to keep their gigs as budgets for series continue to shrink in order to keep shows from bleeding money.