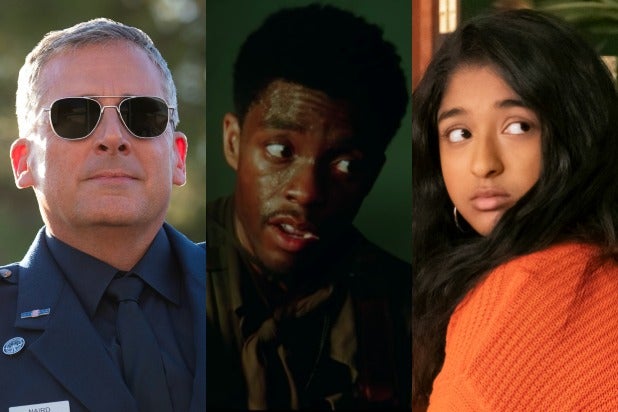 Netflix just dumped a pile of viewership numbers for some its hottest shows and movies released over the last few months of quarantine. Turns out people are watching a lot of stuff at home recently.

Spike Lee’s latest film “Da 5 Bloods” has racked up 27 million views since the movie debuted in June, while “Space Force,” the Steve Carell comedy, has been seen by 40 million people in its first month on Netflix.

Those were just two of the several highlights Netflix shared as part of an investor’s letter released Thursday and on Twitter.

Mindy Kaling’s “Never Have I Ever” also hit 40 million households in its first four weeks. The Adam Sandler-produced film “The Wrong Missy” has been seen by 59 million people in its first 28 days. And the game shows “Floor Is Lava” and “Too Hot to Handle” are tracking towards a projected 37 million and 51 million respectively in their first four weeks.

The streamer also says it has seen a significant increase in the number of movies streamed in their “Black Lives Matter” collection, including “13th,” “American Son” and “Dear White People.”

This data comes after Bloomberg acquired a list of the top 10 movies on Netflix in their first four weeks, with the recent Chris Hemsworth action film topping the list at 99 million views. In fact, all of the films on that list were released within the last three years, with most coming in the last calendar year. Netflix has added 43.6 million new subscribers since the start of 2019, and the streamer also just revealed Thursday that it added another 10.1 million subscribers in Q2. You can see that list here.

Though all these numbers should come with a caveat. Prior to Jan. 21, 2020, when Netflix shared its internal viewing statistics for “The Witcher,” Netflix would count a view after 70% of a show or movie was watched. In the case of “The Witcher” premiere, that would have translated to 42 minutes of Episode 1.

Just in time to release “The Witcher” numbers, however, Netflix made a “view” much more attainable. The company now counts a session as a “view” when a subscriber chooses to and does watch “for at least 2 minutes — long enough to indicate the choice was intentional,” in Netflix’s words.

Back then, Netflix said it “made more sense” to change how it counts views considering the “widely varying lengths” of its shows and movies.

“The Witcher” by the way Netflix said was watched by 76 million households in its first month, and that was before COVID-19 lock downs.