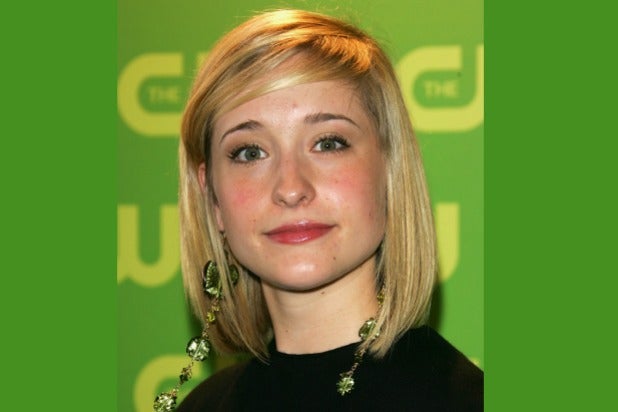 Actress Allison Mack appears to have tried to recruit actress Emma Watson and “The Voice” judge Kelly Clarkson into a self-help group authorities say is a sex cult, according to several tweets first unearthed by Business Insider.

Mack, best known for the superhero TV series “Smallville,” was arrested Friday for her involvement in the organization NXIVM.  Her indictment follows that of NXIVM founder Keith Raniere, who was arrested in Mexico last month and has been charged with sex trafficking, sex trafficking conspiracy, and conspiracy to commit forced labor.

In a statement Friday, U.S. attorney Richard P. Donoghue said that Mack recruited women for Raniere, and that the women were “exploited, both sexually and for their labor.” He said Mack, who was arrested in Brooklyn, New York, is accused of “directly or implicitly” requiring women “to engage in sexual activity with Raniere. In exchange for this, Mack received financial and other benefits from Raniere.”

In 2016, she made several attempts to reach out to Watson on Twitter. “I’m a fellow actress like yourself & involved in an amazing women’s movement I think you’d dig,” Mack tweeted the “Harry Potter” and “Beauty and the Beast” star in January 2016. “I’d love to chat if you’re open.”

She tried her luck agin a month later, telling Watson in a thread: “I participate in a unique human development & women’s movement I’d love to tell you about. As a fellow actress I can relate so… well to your vision and what you want to see in the world. I think we could work together. Let me know if you’re willing to chat.”

In March 7, 2016, right before International Women’s Day, she tweeted Watson a third time, saying: “Would love to chat with a fellow change-maker!”

.@EmWatson I participate in a unique human development & women's movement I'd love to tell you about. As a fellow actress I can relate so…

.@EmWatson well to your vision and what you want to see in the world. I think we could work together. Let me know if you're willing to chat

@TheCathyJensen @EmWatson Thank you for the bump up! Would love to chat with a fellow change-maker! #InternationalWomensDay

And a tweet from three years earlier suggests Mack may have also tried to recruit singer Kelly Clarkson as well.

“@kelly_clarkson I heard through the grapevine that you’re a fan of Smallville. I’m a fan of yours as well! I’d love to chat sometime,” she wrote in July, 2013.

@kelly_clarkson I heard through the grapevine that you're a fan of Smallville. I'm a fan of yours as well! I'd love to chat sometime.

Neither Watson nor Clarkson responded to Mack’s tweets. Reps for the two did not immediately respond to a request for comment. An email to Mack’s publicist went unanswered.

Raniere relocated to Mexico after the publication of a New York Times report about NXIVM practices like branding women. Federal authorities say Raniere and Mack created a secret society within NXIVM in 2015 called “DOS,” which “operated with levels of women ‘slaves’ headed by ‘masters,'” and that some of the DOS slaves became masters who “directly or implicitly required the slaves to have sex with Raniere.”

Mack’s involvement with NXIVM has long been a subject of speculation: She can be seen in a series of conversations posted to YouTube last year, cheerfully interviewing Raniere about his teachings.

If convicted of the crimes charged, Raniere and Mack each face mandatory minimum sentences of 15 years and up to life imprisonment.