Charlie Sheen tweeted Friday night that he’s unable to contact his parents — actor Martin Sheen, and Janet Sheen, and is asking any of his followers with eyes on a staging ground near Zuma Beach to let him know they’re OK. Saturday morning,

i cannot
get ahold of
my parents,
Martin and Janet Sheen.

they
are in the
group, at the
staging ground
near Zuma Beach.

if
anyone
has eyes on
them,
please let me
know that they
are safe and sound
in the middle of
this horrific scenario.

thank you
in advance.

Late Friday, the elder Sheen told FOX11 that he and his family were fine. “We’re at Zuma Beach. We’re probably going to sleep in the car tonight. We’re just fine and hope you guys are, too.”

“Doctor Strange” director Scott Derrickson lost his home in the blaze, while many others left because of approaching flames, fueled into Friday by wind gusts of up to 40 miles per hour.

We lost our home, but we are all safe and that’s the important thing. Gonna be offline for awhile.

Jenner shared a video on Instagram late Friday, informing her followers that she had been evacuated to a safe house, but the fate of her home was “still up in the air.”

Kim Kardashian tweeted that though the fire had reached her family’s property, it was beginning to be contained and appeared to have stopped.

I heard the flames have hit our property at our home in Hidden Hills but now are more contained and have stopped at the moment. It doesn’t seems like it is getting worse right now, I just pray the winds are in our favor. God is good. I’m just praying everyone is safe 🙏🏼 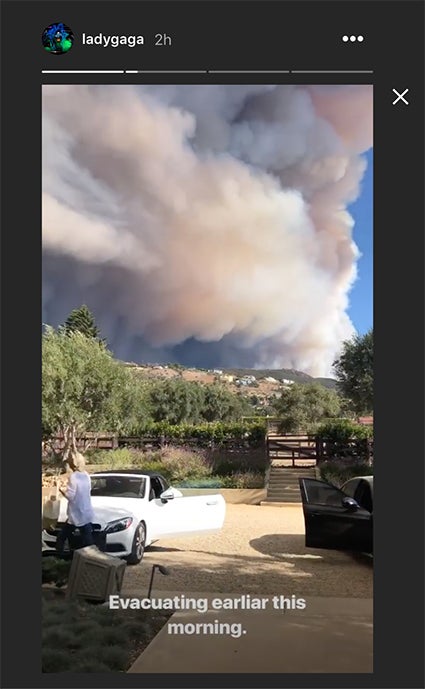 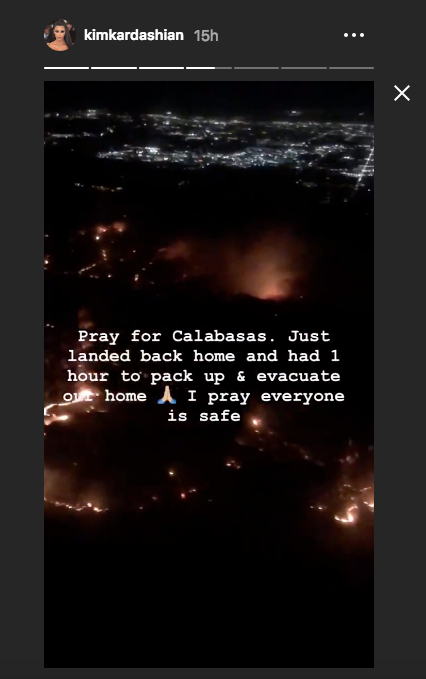 I just had to evacuate my home from the fires. I took my kids, dogs, computer and my Doc Marten boots.

(Husband is in NY. Horses are being evacuated by my trainer.)

Mark Hamill said his house is “dangerously close” to the fire:

Thanks for your concern everyone. Although the 🔥🔥 are dangerously close to our home-@MarilouHamill-@NathanHamill-@GriffinHamill-@chelseahamill-Millie-Mabel & I are all safe at the moment & rooting for our #FearlessFirefighters in their battle vs #MeanMotherNature. pic.twitter.com/nBC5HscBlK

My House has been evacuated due to nearby fires in Thousand Oaks. (The pigs & dogs are fine, thank you) Please send your prayers to the people of Thousand Oaks and the victims of the shooting that are now having to evacuate their homes and neighborhoods. Then send them some cash.

Well, well, as if life needed to get more interesting…we have a mandatory evacuation of our home due to the #Woolseyfire . We have gone to a hotel in Santa Monica where we will stay until we can return. Send love and strength to our amazing California firefighters. #safe

Pulling out of my driveway with my two big dogs in the back . Malibu fire evacuation . Please pray for our community and the safety of our first responders 🙏 #malibufire #evacuation #pray… https://t.co/s0BuqO4Un1

Evacuated last night. Bleak House and the collection may be endangered but the gift of life remains. Thousand Oaks and Agoura are still in danger. Malibu is being evacuated.

I am with Rob, Dream and True and I am up keeping watch! Saying prayers and thanking all of the brave firefighters who risk their lives for us ❤️❤️ https://t.co/eVlJgWSqVd

#MISSINGPERSON information regarding the #CampFire can be shared using this hashtag: #CampFireJamesWoods People can tweet info regarding missing loved ones, then my followers and I retweet it. The hashtag can then be searched. @BreakingNLive pic.twitter.com/aasjJDD6Ia

SOUTHERN CALIFORNIA! Anybody near #Malibu with a horse trailer, SYCAMORE FARM needs to evacuate 40 horses from 3661 Cross Creek Road before the fires get there! #WoolseyFire https://t.co/XJe0x85TBo

Singer Cher expressed worry over her Malibu home on Friday:

I’m worried about my house🔥, but there is nothing I can do.
Friends houses have burned🙏🏻
I can’t bear the thought of there being no Malibu I’ve had a house in Malibu since 1972😭

Meanwhile, much further north in Paradise, California, which was devastated by a separate wildfire, hosts of the HGTV show “Rustic Rehab” shared on Facebook that their family is safe.

The Woolsey fire doubled in size to 70,000 acres overnight. As of Saturday evening it was 5 percent contained.

Two people have been found dead in the burn areas, Los Angeles County Sheriff’s Department Chief John Benedict confirmed. In addition, Councilmember Bob Blumenfield said in a statement that over 250,000 people have been evacuated from the Ventura County fire areas, and the shifting winds could bring more devastation.

“The strong Santa Ana winds have made this fire unpredictable and the winds are expected to shift today which could mean new areas, including potentially the Western San Fernando Valley,” Blumenfield said.

Where does his latest, ”The Shape of Water,“ rank among the director’s storied output?