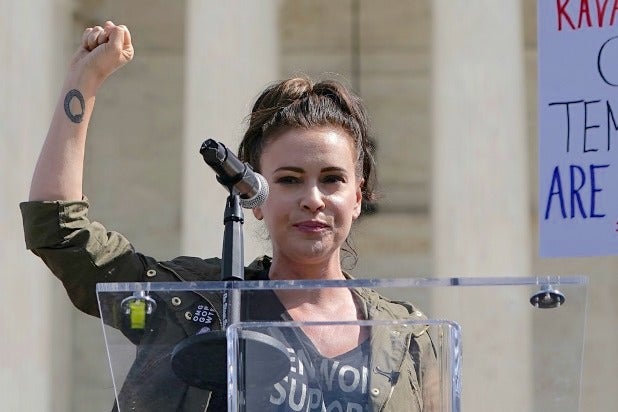 Alyssa Milano responded to Georgia’s anti-abortion law by calling for women to just say no to sex “until we get bodily autonomy back.”

“Our reproductive rights are being erased,” the actress-activist tweeted Friday night. “Until women have legal control over our own bodies we just cannot risk pregnancy. JOIN ME by not having sex until we get bodily autonomy back. I’m calling for a #SexStrike. Pass it on.”

The message was accompanied by a giant pink “x” and the caption “If our choices are denied, so are yours.”

Georgia state legislation this week banned abortions after a fetal heartbeat is detected, as early as six weeks into a pregnancy. Milano also supports a boycott on filming in Georgia if the law isn’t changed. The second season of her Netflix show “Insatiable” is currently in production there.

“I will do everything in my power to get as many productions as possible — including ‘Insatiable’ — to move out of this state which continues to put forth oppressive, hurtful policy that contradicts everything the entertainment industry stands for,” Milano said in a statement to TheWrap Thursday.

She added: “Obviously, those who are already contractually obligated to be there, should fight to get their show out of Georgia while continuing their contractual obligation. I have to be there for another three weeks but you can be sure I will fight tooth and nail to move ‘Insatiable’ to a state that will protect our rights. And if it doesn’t move to another state, I will not be able to return to the show if we are blessed with a third season. This is my leverage. I will use it for the betterment of society and our great country.”

Our reproductive rights are being erased.

Until women have legal control over our own bodies we just cannot risk pregnancy.

JOIN ME by not having sex until we get bodily autonomy back.

“Film and television production in Georgia supports more than 92,000 jobs and brings significant economic benefits to communities and families,” Motion Picture Association of America (MPAA) spokesman Chris Ortman said in a statement. “It is important to remember that similar legislation has been attempted in other states, and has either been enjoined by the courts or is currently being challenged. The outcome in Georgia will also be determined through the legal process. We will continue to monitor developments.”

The Washington Post notes that Georgia passed a tax credit over a decade ago in which productions can collect up to 30% of its budget if filmed in the state, resulting in the studio either saving money or enabling an increase in the project’s budget.