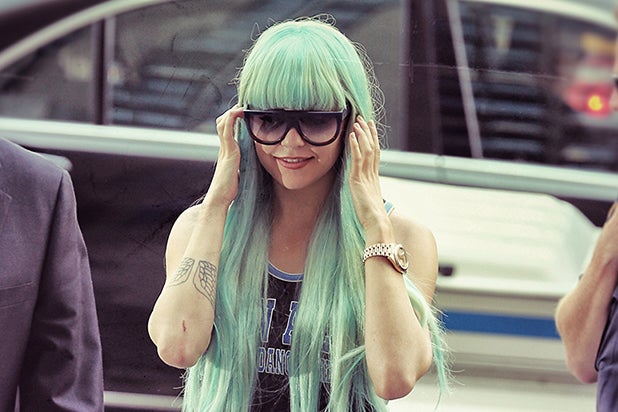 Amanda Bynes is back in legal trouble.

The 28-year-old actress was arrested around 4 a.m. Sunday for suspicion of driving under the influence of a drug after California Highway Patrol observed her white Mercedes Benz GL 450 stopping in the middle of a Sherman Oaks, Calif. intersection.

Believing her to be under the influence, officers transported her to the West Valley CHP office in Woodland Hills, Calif. and had her evaluated by a Drug Recognition Expert. Based upon the results of both that evaluation and their initial observation of her driving, Bynes was arrested for “driving under the influence of a drug” and booked at around 7 a.m., according to the CHP.

The arrest report noted Bynes’ “disheveled appearance” and that she remained cooperative during the whole process, but it did not say which drug officers think she had taken.

The actress was released on $15,000 bail later Sunday afternoon, according to the Los Angeles County Sheriff’s Department.

It’s not the first time the “Easy A” actress has been arrested for DUI. As TheWrap previously reported, she was booked in 2012 after hitting a police car. She agreed to a plea deal stemming from that arrest back in February, the terms of which put her on 3-years probation and forced her to enter three months of drug and alcohol treatment.

In addition to her driving related arrests, Bynes has made tabloid headlines in recent years for everything from a driveway fire to a flurry of bizarre and often vitriolic tweets.

In July of 2013 Bynes entered rehab and stayed there under a court-ordered psychiatric hold. She was released that December and eventually enrolled in Los Angeles’ Fashion Institute of Design and Merchandising.