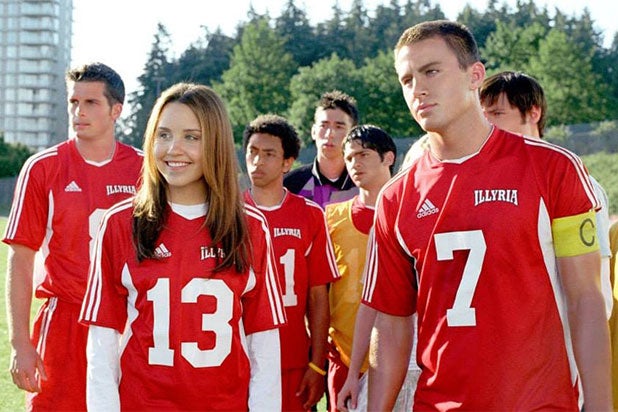 In a frank and revealing interview, Amanda Bynes talked about her battle with drug addiction, and said that the experience of making her 2006 comedy “She’s the Man” led her into what she describes as “a deep depression.”

“When the movie came out and I saw it,” she told Paper Magazine, “I went into a deep depression for four to six months because I didn’t like how I looked when I was a boy.”

Directed by Andy Fickman, “She’s the Man” starred Bynes as a teenager who, after her all-girl’s school’s soccer team is cut, disguises herself as a boy in order to play for an exclusive all-male prep school. Bynes tells paper that seeing herself with short hair and sideburns was “a super strange and out-of-body experience. It just really put me into a funk.”

The film also features Channing Tatum in his first starring role in a feature film. “I totally fought for Channing [to get cast in] that movie because he wasn’t famous yet,” said Bynes. “He’d just done a Mountain Dew commercial and I was like, ‘This guy’s a star — every girl will love him!’ But [the producers] were like, ‘He’s so much older than all of you!’ And I was like, ‘It doesn’t matter! Trust me!'”

About her drug abuse, Bynes said that she didn’t really drink much as a teenager, but started smoking marijuana when she was 16.

“Even though everyone thought I was the ‘good girl,’ I did smoke marijuana from that point on.” she said. “I didn’t get addicted [then] and I wasn’t abusing it. And I wasn’t going out and partying or making a fool of myself… yet.”

She added, “Later on it progressed to doing molly and ecstasy. [I tried] cocaine three times but I never got high from cocaine. I never liked it. It was never my drug of choice… I definitely abused Adderall.”

She said that she read an article that said Adderall was “the new skinny pill,” which prompted her to want to get her hands on it. She said she was able to get a prescription for it after going “to a psychiatrist and faking the symptoms of ADD.”

“When I was doing ‘Hall Pass,’ I remember being in the trailer and I used to chew the Adderall tablets because I thought they made me [more] high [that way],” she said. “I remember chewing on a bunch of them and literally being scatterbrained and not being able to focus on my lines or memorize them for that matter.”

She said she “remembers seeing my image on the screen and literally tripping out and thinking my arm looked so fat because it was in the foreground or whatever and I remember rushing off set and thinking, ‘Oh my god, I look so bad.'”

In 2014, Bynes was arrested for suspicion of driving under the influence. She had previously been booked for hitting a police car in 2012, and entered rehab the following year. Now, the former Nickelodeon star said, she’s been “sober for almost four years.”