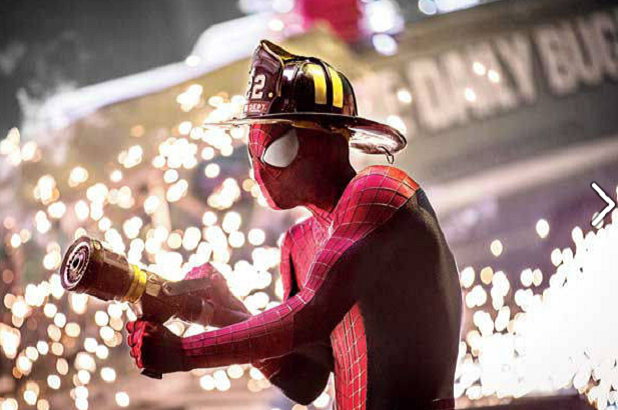 We’re not sure where the fire is, but it’s clear that Spidey will be dressed for the occasion as evidenced by this new still photo from the upcoming Sony superhero saga “The Amazing Spider-Man 2.”

It was one of three shots from the upcoming Marvel  sequel, set for a May 2, 2014 release in the U.S., that surfaced in the Times of India over the weekend.

Also read: 10 Horrible Marvel Movies – Before It Took Over the World (Photos)

Here’s another, this one featuring Jamie Foxx as the super villain Electro.

And here’s another below, this one featuring Emma Stone and Andrew Garfield as Gwen Stacy and Peter Parker in the film.

The last film, “The Amazing Spider-Man,” was released in July of 2012 and took in more than $750 million worldwide. It was a reboot, coming five years after the previous Spidey film.