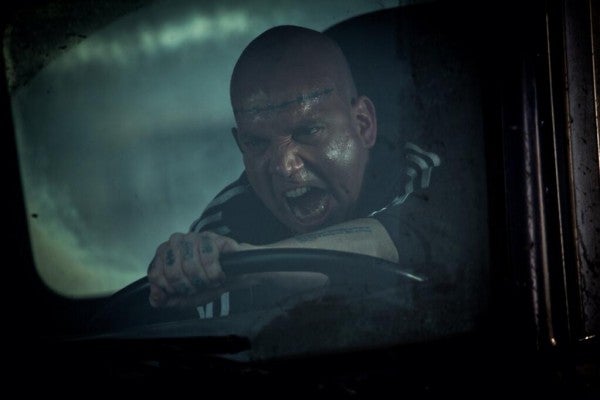 Paul Giamatti is bald, tattooed and overflowing with rage in a new set photo from "The Amazing Spider-Man 2."

The Oscar-nominee has been tasked with portraying The Rhino, who antagonizes the titular Wall Crawler with his augmented strength, polymer mat suit and nasty horn. Said spike and outfit are nowhere to be seen in a photo director Marc Webb shared with his 42,560 Twitter followers this weekend, but based on the snapshot, Giamatti has mastered the whole aggression thing.

Webb tweeted the picture with a message in Russian that the film fan site Collider translates to mean, "Hello, America. Meet Aleksei Sytsevich!”

In the comic books, Sytsevich is the Eastern Bloc agent who agrees to have the special suit bonded to his skin.

"The Amazing Spider-Man 2" debuts on May 2, 2014 and brings back Andrew Garfield and Emma Stone as Spidey and Gwen Stacey, as well as Jamie Foxx as the villain Electro and Shailene Woodley as Mary Jane Watson.