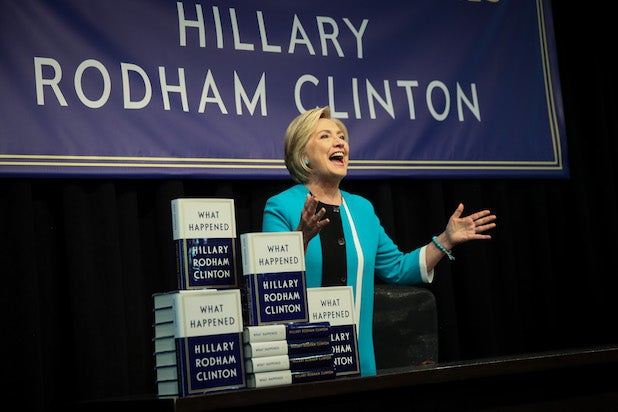 It looks like Amazon just deleted hundreds of suspicious reviews of Hillary Clinton’s book, “What Happened,” after several news reports and the book’s publisher questioned their authenticity.

Clinton’s book about how she lost the election, which hit bookstores Tuesday, received mixed reviews, with 50 percent one-star and 45 percent five-star reviews.

But a closer examination by Quartz suggests the a large chunk of the reviews were likely from “a concerted attack to bring down the average reviews on her page.”

Just hours later, Quartz reported that Amazon had apparently deleted more than 900 reviews of the book.

Of the book’s 1,699 reviews as of Wednesday morning only 338 were from users who actually bought the book on Amazon.com, according to Quartz’s report, suggesting many of the reviews were posted by people who never read the book.

The almost dead split between verified and unverified purchases in the reviews for Clinton’s book also raised some red flags, as it was outside the norm compared to the top-10 bestselling books so far this year on Amazon. The unusually high number of unverified reviews was also suspicious, according to ReviewMeta, an independent site that helps customers figure a product’s credibility.

A spokesperson for Amazon neither confirmed nor denied the company deleted the reviews, telling TheWrap in a statement: “Amazon Customer Reviews must be reviews related to the product and are designed to help customers make purchase decisions. In the case of a memoir, the subject of the book is the author and their views. It’s not our role to decide what a customer would view as helpful or unhelpful in making their decision. We do however have mechanisms in place to ensure that the voices of many do not drown out the voices of a few and we remove customer reviews that violate our Community Guidelines.”

According to Quartz, “What Happened” got a “big ol’ fail,”  with a 3.2-star rating on Amazon before the suspicious reviews were deleted. The number went up once Amazon removed the reviews, and now stands at 4.3 stars.

Simon & Schuster publisher Jonathan Karp told the Associated Press on Wednesday: “It seems highly unlikely that approximately 1,500 people read Hillary Clinton’s book overnight and came to the stark conclusion that it is either brilliant or awful.”

And last month, Amy Schumer’s book “The Girl with the Lower Back Tattoo” was flooded by one-star reviews despite being No. 2 on Amazon’s list of best-sellers and garnering critical praise.