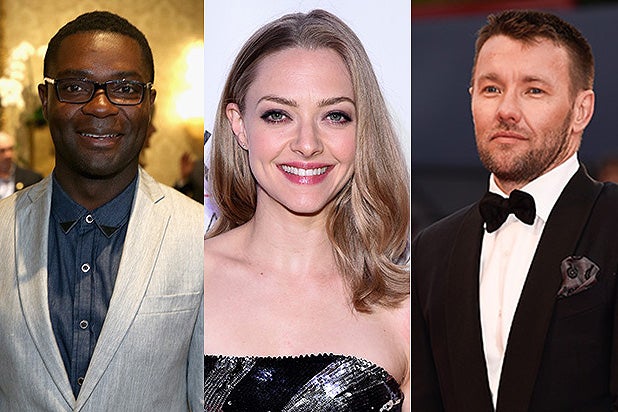 Theron will produce through her Denver & Delilah banner along with Rebecca Yeldham, who recently produced Joel Edgerton‘s directorial debut “The Gift.” Nash Edgerton will also produce under his Blue-Tongue Films banner. Matthew Stone and Anthony Tambakis (“Warrior”) wrote the script.

While Seyfried is firmly attached and Joel Edgerton has also committed to the project, given that his brother is directing, Oyelowo is merely expecting an offer for the lead at this point, so his participation is still pending.

Annapurna International announced it would be selling foreign rights at Cannes earlier this year, but Megan Ellison‘s Annapurna Pictures banner is no longer running point on the project. “American Express” is now awaiting a greenlight from Amazon Studios, which hopes to start production in the first quarter of 2016.

Representatives for Amazon and Theron did not respond to multiple requests for comment.

Nash Edgerton made his directorial debut with the acclaimed Aussie thriller “The Square,” and also directed the memorable short films “Spider” and “Bear,” both of which screened at Sundance. ICM Partners represents Nash Edgerton and negotiated the “American Express” sale to Amazon.

Oyelowo, who is also the frontrunner to play Joe Frazier in Ang Lee‘s untitled 3D boxing movie about the Thrilla in Manila, is represented by CAA, Inphenate. and Hamilton Hodell.

Seyfried is coming off a busy year in which she starred in Noah Baumbach‘s “While We’re Young” and Seth MacFarlane‘s “Ted 2,” as well as “Pan” and “Love the Coopers.” She’ll soon be seen alongside Russell Crowe and Aaron Paul in Gabriele Muccino‘s drama “Fathers and Daughters.” She’s repped by Innovative Artists.

Joel Edgerton can currently be seen opposite Johnny Depp in “Black Mass” and alongside Dane DeHaan and Robert Pattinson in Anton Corbijn’s “Life.” He’ll soon be seen opposite Natalie Portman in “Jane Got a Gun” and in a pair of Jeff Nichols movies — “Midnight Special” and “Loving.” He also co-wrote, executive produced and starred in Nash Edgerton‘s “The Square,” and the siblings have a long history working together under their Blue-Tongue Films banner. He’s repped by CAA, Markham, Froggatt and Irwin and Shanahan Management.