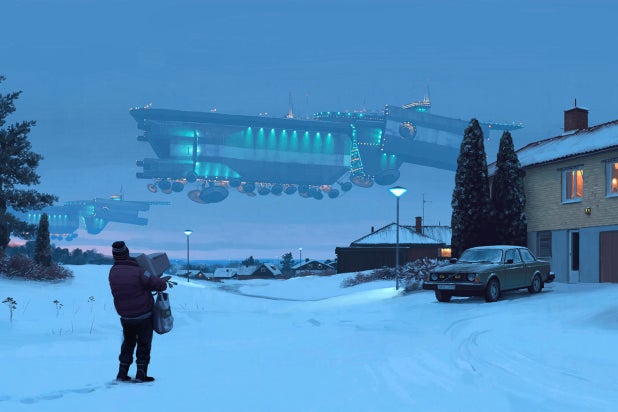 Amazon Studios has greenlit, “Tales from the Loop,” an hour-long science-fiction series executive produced by “War for Planet of the Apes” director Matt Reeves.

The genre series is based on the famous artwork of Simon Stålenhag. A co-production with Fox 21 Television Studios, the eight-episode series will be helmed by executive producer Nathaniel Halpern, with Mark Romanek directing the pilot episode.

“Tales from the Loop” explores the town and people who live above “The Loop,” a machine built to unlock and explore the mysteries of the universe — making things possible that were previously relegated only to science fiction. In this fantastical, mysterious town, poignant human tales are told that bare universal emotional experiences while drawing on the intrigue of genre storytelling.

“I was immediately intrigued by the idea of bringing Stålenhag’s incredible paintings to life, but it’s Nathaniel’s deeply inspired vision for this world, and the stories he has created from an incredibly passionate and emotional place, that will drive this series and its storytelling. Together with Mark’s brilliant visual sensibility and unique point of view, it makes this a truly exceptional project and the perfect one to partner with Amazon in our studio’s first direct-to-series order at the streamer,” commented Jane Francis, EVP of Fox 21 Television Studios.

Reeves will executive produce “Tales from the Loop” under his Sixth & Idaho company with Adam Kassan and Rafi Crohn also on board as executive producers. Reeves is set to direct Warner Bros.’ upcoming “The Batman” standalone feature (that may or not star Ben Affleck as the Caped Crusader. Earlier this year, he set a first-look deal with Netflix, but was based at Fox before that.

“Simon Stålenhag’s paintings are renowned for their vision of a not-too-distant, futuristic landscape. We are looking forward to bringing that to life and sharing it with our Prime Video audience,” said Albert Cheng, Co-Head of Television, Amazon Studios.

15 Time Travel TV Shows You Should Be Watching Right Now, From '12 Monkeys' to 'Dark' (Photos)

Prehistoric monsters, dangerous meta-humans and confused scientists — these time travel shows have it all

You're not imagining it -- there really is a mess of time travel shows available right now. Whether you're watching on TV, cable or streaming, there's no shortage of time-hopping shows that are messing up history.

Here are 14  time travel shows you should be watching right now.