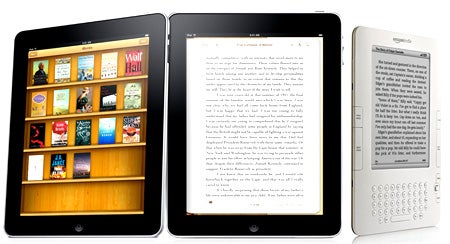 In the war over the price of e-books, it’s looking like publishers are about to win a critical battle. But Amazon is still dragging its feet.

Amazon — which had dug in its heels over its standard $9.99 price — told customers over the weekend that it was caving in to Macmillan’s demands to boost the price of its titles to $14.99. But the Kindle-maker sure is taking its sweet time putting Macmillan titles back on the e-shelves.

It’s now been four days since Amazon said it would reluctantly “capitulate” to Macmillan, and though the publisher’s books began to trickle back onto the site Tuesday, many titles were still unavailable for hardcover purchase directly through Amazon’s store.

Whether Amazon was being passive-aggressive or just lazy isn’t clear. But Amazon’s snit with Macmillan is just only the tip of the iceberg: Not only has Apple said its iBooks store will charge $14.99, but News Corp. chief Rupert Murdoch said on Tuesday’s call with investors that he doesn’t like HarperCollins’ deal with Amazon — and may challenge the bookseller’s discount pricing, too.

In case you missed it, the latest book business brouhaha started last week, when pricing talks between Amazon and Macmillan broke off, and the Seattle-based bookseller stopped selling Macmillan titles directly on Friday.

On Saturday, Macmillan took out an ad in Publishers Lunch outlining its case, warning that it would delay the release of e-books if Amazon did not agree to its pricing model. On Sunday, Amazon released a statement to its customers, saying it would “have to capitulate and accept Macmillan’s terms because Macmillan has a monopoly over their own titles, and we will want to offer them to you even at prices we believe are needlessly high for e-books.”

And it’s bound to get uglier – and more complicated, with Apple’s impending launch of its iBookstore for the iPad.

Apple intends to price e-books at $14.99, essentially siding with book publishers in the hopes that they’ll cut deals with the iPad for exclusive releases, putting a dent into the Kindle’s market dominance. ("Publishers will actually withhold their books from Amazon," Steve Jobs told the Wall Street Journal, "because they are not happy with the price.")

But will Apple’s Kindle-killer strategy work?

That question could ultimately depend on e-book customers. There’s already a small movement organized by Kindle enthusiasts to boycott any e-book that is priced over $9.99.

“I think Amazon has quite successfully burned the $9.99 price point into the brains of digital readers,” said Jason Boog, editor of mediabistro.com’s book industry blog, GalleyCat. “If people are actively organizing boycotts against a certain price point, for better or for worse, Amazon has already won the price war.”

Boog predicts publishers “will be forced to offer a bare-bones $9.99 eBook edition for most books, and then build fancier ‘enhanced’ e-books for tablet computers and sell for a premium price.” (There’s precedent for this, as anyone who has downloaded an “enhanced” album on iTunes or bought a DVD loaded with extras can attest.)

Yet, as Daily Finance’s Sarah Weinman points out, $9.99 “is supposed to be this magical price point to hook customers and at least get them to feel that Amazon is looking out for them, when really they are looking out, first and always, for their bottom line.”

“The Kindle won’t be killed anytime soon, even with the emergence of the iPad, because there is a market, however fixed, for dedicated e-readers,” Weinman said. “But I’ve long said the Kindle is like the Apple IIe once was, and there may yet be room for a device that combines the alleged awesomeness of the iPad with less emphasis on LCD backlit reading.”

The big thing for all parties now is a marketing issue.

“Amazon has done a great job of marketing the illusion that an e-book should be $9.99,” Weinman said. “So how can publishers tell consumers, in clear terms, why $9.99 is bad and convince them that discount culture shouldn’t screw over the authors they profess to love?”