Below is a look at the stock over the course of five days, to best illustrate Tuesday’s pre-market jump. Readers can see it as a straight vertical line above “May 10.” 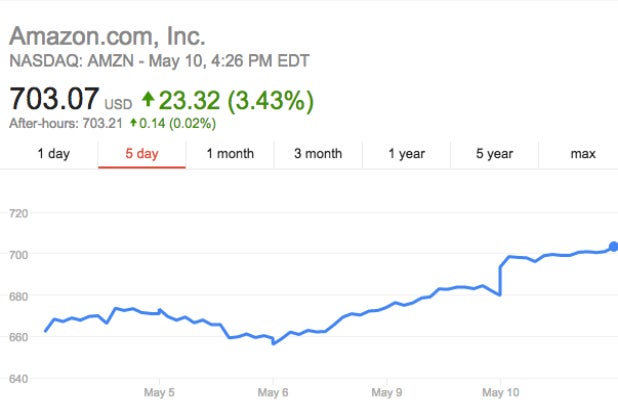 The stock jump is likely mostly attributable to a Bernstein report, which set an ambitious new AMZN target price of $1,000 per share. Their old price was $770 — so this is a pretty big leap of faith.

“Amazon does not trade anywhere near what we think it is worth on a fundamental basis,” Bernstein analysts wrote in a report released to the media on Tuesday. But they admitted that their ceiling is way higher than that of any consensus — or, as Bernstein called the target, “massively ahead” of other predictions.

“We believe revenue growth will continue to be strong over the next two years,” they went on, “as it continues to benefit from the growth of Prime users and the likely increase in spend per user.”

Of course, the stock could split at its current level, or it definitely will if it actually approaches the $1,000-per-share valuation.

Earlier on Tuesday, Amazon announced that it is basically mixing YouTube’s style with Netflix’s, creating a new program called Amazon Video Direct that lets almost anybody sell video to its giant base of viewers. The company is even dangling a $1 million prize to get creators interested.

On the self-service Amazon Video Direct, people can make their video available to Amazon customers as pay-per-view clips, through direct subscriptions, as a new perk to anyone who subscribes to Amazon’s Prime or Prime Video, or as free clips supported by advertising. Anyone with a valid Amazon account in the U.S., U.K., Germany or Japan can sign up for a self-publishing account.

That mix of open access creates a corner of Amazon that competes more directly with user-generated sites like Google’s YouTube and Vimeo. Amazon has been widening its video ambitions this year, taking on Netflix more directly last month when it began offering customers the option of subscribing directly to its Prime Video service at a cheaper rate than that of its bigger rival.