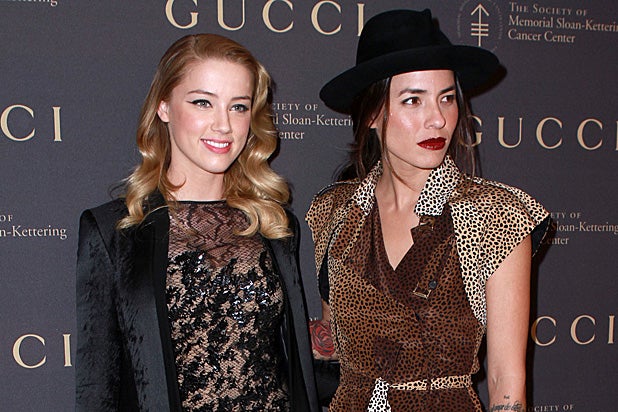 As Johnny Depp and Amber Heard both battle abuse allegations, the “Rum Diaries” actress’ ex-girlfriend has addressed Heard’s arrest for committing domestic violence against her.

“In 2009, Amber was wrongfully accused for an incident that was misinterpreted and over-sensationalized by two individuals in a power position,” Tasya van Ree (above right with Heard, in 2010) said in a statement Wednesday, People reported.

Authorities at the Seattle-Tacoma International Airport in Washington State have confirmed that Heard was arrested by Port of Seattle Police on Sept. 14, 2009, after she got into an argument with the artist/photographer and allegedly grabbed and struck van Ree’s arm.

Heard was apprehended for misdemeanor assault in the fourth degree/domestic violence, but in November of 2011, police received a request to delete the arrest information on the case (which is allowed under Washington state law), according to USAToday.

The couple split up in 2012 but have remained on amicable terms, van Ree said.

“It’s disheartening that Amber’s integrity and story are being questioned yet again. Amber is a brilliant, honest and beautiful woman and I have the utmost respect for her,” she continued in her statement. “We shared five wonderful years together and remain close to this day.”

After going on to wed her “Rum Diaries” co-star Depp in February 2015, Heard filed for divorce after just over a year of marriage, on May 23, 2016. Days later, she released photos showing facial bruising and claimed Depp had physically abused her on multiple occasions. The 30-year-old actress has since sought a restraining order.

In her initial declaration, Heard claimed that Depp had been abusive throughout their relationship and that, on May 21, he arrived at their home “inebriated and high,” becoming “extremely angry.” Heard went on to claim that Depp struck her with his cellphone in her cheek and eye.