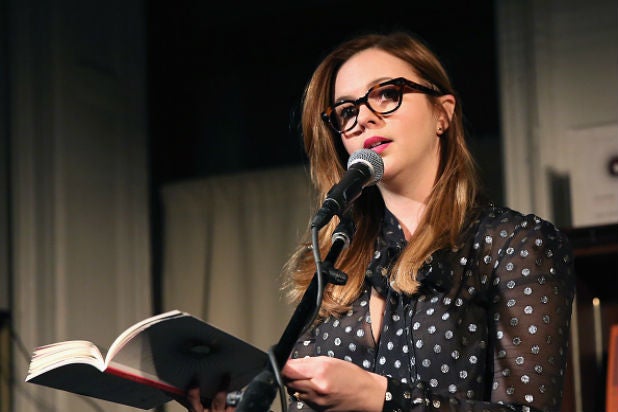 Amber Tamblyn punctuated her Twitter spat with James Woods in a New York Times op-ed titled “I’m Done With Not Being Believed” saying women are tired of being ignored about sexual harassment.

She tweeted that it was “less about what just happened with Woods and more about Woods Culture and how we can end it.”

Tamblyn writes that when she was working on a show at age 21 she told a producer that a crew member’s leers made her feel unsafe. She said he replied, “Well, there are two sides to every story.”

“For women in America who come forward with stories of harassment, abuse and sexual assault, there are not two sides to every story, however noble that principle might seem. Women do not get to have a side,” Tamblyn said. “They get to have an interrogation.”

Also Read: Amber Tamblyn Says James Woods Tried to Pick Her Up When She Was 16

Tamblyn’s fight with Woods began Sunday over Armie Hammer’s gay-romance movie “Call Me by Your Name.” Woods objected to the relationship in the film between a 17-year-old and 24-year-old.

Tamblyn tweeted, “James Woods tried to pick me and my friend up at a restaurant once. He wanted to take us to Vegas. ‘I’m 16’ I said. ‘Even better’ he said.”

Also Read: Amber Tamblyn's Open Letter to James Woods: 'I See Your Gaslight and Now Will Raise You a Scorched Earth'

“What would I get out of accusing this person of such an action, almost 20 years after the fact? Notoriety, power or respect?” Tamblyn wrote in the Times. “The emotional cost alone of bringing up such memories publicly or coming forward with such recollections is pure bankruptcy. It is spiritual foreclosure.

“Mr. Woods’s accusation that I was lying sent me back to that day in that producer’s office, and back to all the days I’ve spent in the offices of men; of feeling unsure, uneasy, questioned and disbelieved, no matter the conversation.”

Tamblyn continued, “I have been afraid of speaking out or asking things of men in positions of power for years. What I have experienced as an actress working in a business whose business is to objectify women is frightening. It is the deep end of a pool where I cannot swim. It is a famous man telling you that you are a liar for what you have remembered. For what you must have misremembered, unless you have proof.

15 Stars Who Fought Back Against Body Shaming, From Chrissy Metz to Vin Diesel (Photos)

Amy Schumer, Jennifer Lawrence and Sam Smith have also clapped back at trolls

Chrissy Metz, Vin Diesel and Jennifer Lawrence have spoken out against body shaming in the past