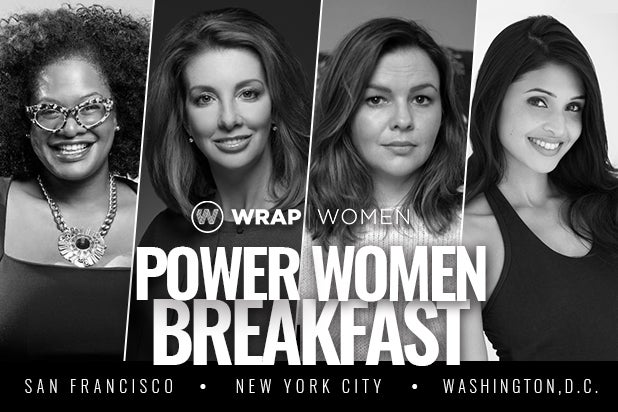 Actress and activist Tamblyn will join the Time’s Up panel in Washington, D.C. on June 13 to be moderated by Washington Post writer Sarah Ellison.

In San Francisco on July 12, Kathryn Finney, founder of digitalundivided, will share data from the group’s most recent Project Diane report on the state of Black and Latinx women in the entrepreneurship and innovation economies.

Tickets are available on a donation basis to attend the Power Women Breakfast Series with 100 percent of proceeds go directly to benefit women’s leadership programs and gender equity initiatives via WrapWomen Foundation.

More on our speakers:

* Tamblyn is one of the founding actresses of the Time’s Up Initiative and is a prominent voice for the #MeToo movement. Known for her roles in “Sisterhood of the Traveling Pants” and “General Hospital,” Tamblyn joins a panel in D.C. that includes political strategist Hilary Rosen and National Women’s Law Center President and CEO Fatima Goss Graves. The panel will be moderated by Washington Post writer Sarah Ellison.

* The day after the Sandy Hook tragedy, Shannon Watts started a Facebook group with the message that all Americans can help reduce gun violence. The online conversation turned into a grassroots movement of American mothers fighting for public safety measures that respect the Second Amendment and protect all people from gun violence. Watts will be joined in conversation with activist Shenee Johnson, who lost her 18-year-old son, Kedrick Morrow, to gun violence, and actress and activist Alysia Reiner.

* Founded in 2013, ClassPass is one of the country’s fastest-growing lifestyle start-ups, selling subscriptions to fitness classes. Kadakia has raised $154 million in capital, most recently at a $400 million valuation. Her company is now generating upward of $150 million revenue per year. ClassPass continues to expand across the country, and has launched new features.

* Kathryn Finney is the founder and managing director of digitalundivided (DID), an organization that invests in the success of Black and Latinx female founders in tech by providing them with the network, coaching, and funding to build, scale, and exit their high growth companies. Kathryn is also a former General Partner in the Harriet Fund, the first fund focused on Black and Latinx women founders.