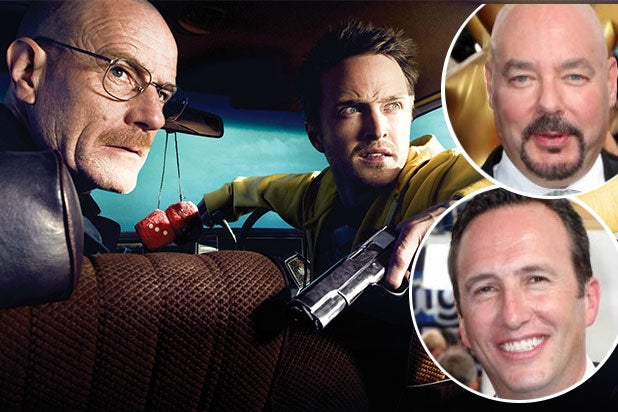 Since it broke big into scripted drama with “Mad Men,” AMC has refused to follow a formula. But president Charlie Collier and executive vice president Joel Stillerman have still found a few rules to live by.

The first is tapping into passionate fan bases, which seems to work best with genres, such as horror (“The Walking Dead”) or Westerns (“Hell on Wheels.”). Even more important? Connecting with modern-day, real-life viewers’ lives, even if your show is about 1960s ad executives, or a meth-making teacher.

With “Breaking Bad” behind us, and “Mad Men” signing off next year, AMC is turning to shows like the upcoming ’80s computer-boom series “Halt and Catch Fire” and the Revolutionary War spy drama “Turn.”

Stillerman said that with “Turn,” AMC can tell its viewers, “This is a show for you if you’re a history buff.” But that’s only the hook.

“What’s amazing is that spying and revolution are on the front page of every newspaper around the world,” he said. “‘Mad Men’ always had that, it has this tremendous relevance to things that are going on now. And I think ‘Halt and Catch Fire’ has that as well, where we don’t even realize how much that moment in time changed our lives.”

We talked with Collier and Stillerman about the setting of “Low Winter Sun,” how the network became an Emmy magnet and hit maker in seven short years, and whether it’s milking the end of “Mad Men.”

TheWrap: With “Breaking Bad” coming to an end, “Mad Men” going into its final season, and the chilly response to “Low Winter Sun,” a lot of people have wondered what’s next.

Charlie Collier: It’s something we have been talking about — “What’s next?” — for seven years. When we had “Mad Men” first. The funny thing was, as “Mad Men” started to percolate, not as a big audience, numerical success, but 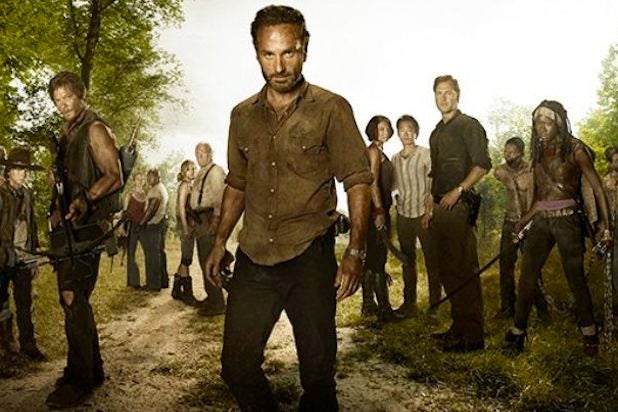 certainly a critical success, that sort of defined the quality of what we wanted to do just seven years ago, we made an active decision not to become a period piece network. We saw every pitch from Motown to flappers, and so we wanted something modern -day, and it turned out to be “Breaking Bad.”

But we were already at that time sort of saying, “Well, what do we want to be? We want to be premium programming on basic cable, which means we’ll be eclectic by design.” So all of a sudden, we got into a very early rhythm about trying to make sure we didn’t do what a lot of what ad-supported television does, which is going vertical. We went horizontal, so we went from a period piece to a modern-day story about a teacher who makes meth with a former student. And when we had that, we went off to do a genre piece with “Hell on Wheels” or we did, obviously, “The Walking Dead,” which was so different. And the pride we take in having the same network be the home of “Mad Men” and “The Walking Dead,” or “Breaking Bad” and “Hell on Wheels,” that’s what got us to the point that you want to talk to us.

So we’re going to keep doing what we did, which is be eclectic by design, try to take some big at-bats that are original — when you you look at “Halt and Catch Fire” and “Turn,” [they’re] like nothing else we’ve had on air before, and certainly original worlds that you haven’t seen on air before.

TheWrap: Are there particular qualities that you look for when you decide to develop a project?

Joel Stillerman: There’s no formula, so to speak. There are certainly some guiding principles, these ideas of being unexpected, Charlie’s point about eclectic by design. If we find success in one area, our first instinct is to look for a fresh direction. Because I think we’re more interesting and more creatively vital if we resist being formulaic as a point

of purpose. We talk a lot about being unconventional, which speaks to how we execute our shows. So if we look at a genre that maybe people have gone to before, we want to make sure we do it in a way that hasn’t been seen before.

I’d point to “The Killing” as being a great example of taking the crime drama genre and turning it on its ear and rethinking it. But we also talk about something that goes back to Charlie’s premium-on-basic-cable point, which is this idea of looking for passionate audiences.  And not necessarily the biggest audiences, but people who have passion about things. And that’s where “The Walking Dead” and “Hell on Wheels” came from directly. We had a very passionate audience for both those genres on our channel and it made perfect sense. Even though they’re not by definition broad like a police procedural is, we knew there were people out there where we could say, “This is for you, you will love this,” and build from there.

TheWrap: Are you taking steps to up the profile of your reality slate?

Stillerman: Well, that’s the goal, for sure. It’s brand-new. We really launched our true unscripted series probably 18 months ago. Last year was the first year we had a full slate and moved some stuff off to another night, so it’s very, very early in the process. But yeah, we’re committed to it for the long run, and not just because we think it makes sense from a business point of view. We really believe that there are brand-defining shows for us out there. We feel like a show like “Comic Book Men” or a show like “Small Town Security,” which is coming back, it’s a show that’s engendered a lot of passion. Again, not the broadest audience by any stretch, but it’s touched a nerve with a lot of people out there, especially in the creative community, so we’re committed. We have a really great show launching in the first quarter of this year called “Game of Arms,” it’s a little like “Fight Club” meets “Deadliest Catch.” Again, it’s similar to what we do on the scripted side; we take chances, we’ll play in a lot of different genres.

Collier: I think there’s something very much to the way we’ve created almost individual metrics to each show, as opposed to saying, “Everything must hit this bar, it’s gotta be this way.” Because “Mad Men” is the most upscale show on television, and “The Walking Dead” happens to be the biggest 18-49 show on television, and “Breaking Bad” brought something else, and “Hell on Wheels” brings something else, and it is, believe it or not, a discipline to be able to look at them all individually, try to figure out who you’re trying to super-serve, if you will, and then make sure you have the discipline to try to do it.

TheWrap: Can you talk a bit about your upcoming pilot “Knifeman?”

Stillerman: It’s really an exceptional piece of material written by a really unique voice, a guy who comes out of both TV and theater, his name is Rolin Jones. It’s loosely, loosely based on a real-life character, but again, one of these shows that will explore a world that we haven’t seen before. It’s not by any measure a traditional medical drama. It’s really about a guy who had a really deep love for science and wanted to explore everything he could  about the human body, but he’s been pushed out of the mainstream, so he had to do it in the shadows, which meant literally robbing graves.

TheWrap: When it was announced that the final season of “Mad Men” would be split into two parts,  as was “Breaking Bad,” some people perceived that as the network milking its previous success.

Collier: I love it. I will say this: If you look at what we did with “Breaking Bad,” in terms of the elevation of that series to pop cultural status, obviously it all starts with Vince Gilligan and a great show and a great team of writers, so I’m not talking about that, but we planned for two years the evolution of that series to conclusion. Because a lot of what you do when you’re fortunate enough to work with people like Vince or Matt Weiner, and you have these as part of your DNA, we’re not looking at replacing them so much as enshrining them. We always say, “CBS never replaced ‘M*A*S*H,’ it doesn’t get replaced, it gets put in the Hall of Fame.” And these two shows are ones that we’ve been very deliberate about. So for example, the splitting of the seasons on AMC started with “Walking Dead,” not “Breaking Bad.” It started tactically, to get the second half out of the way of the Super Bowl and the playoffs, but also the fundamentals underlying it were to try to put the show in the best place to succeed for the most people, because we believe in water cooler television. Joel always talks about the value of anticipation.

And with “Breaking Bad,” you really saw that happen. We literally were planning museum events where Charlie Rose interviewed Vince Gilligan at the Museum of the Moving Image, and we were on a curation tour of this show … it was really a mission for us to elevate the show … And now we’re doing the same with “Mad Men” … We’ve met for a year now on how to complete “Mad Men” in style, and you’ll start to see our plans unfold.

TheWrap: You haven’t done a full-on comedy. Is that something you’d consider?

Collier: We would, We haven’t hung out a shingle formally and said that we’re in the comedy business, but just like unscripted — we see the opportunity to be diversely investing in original programming. We would do comedy for sure.

TheWrap: What do you think went wrong with “Low Winter Sun”?

Stillerman: Ultimately we think it was a season of television that certainly held its own and had some real high points, but it just didn’t connect with the audience, and sometimes that happens.

Collier: And just to point out, we’ve had plenty of other failures … I look at the notion of taking big at-bats. In our case it’s creative at-bats, but trying for the big swings and not always batting for average. And by definition, you’re going to miss. … But I think what you learn from “Low Winter Sun” is, when it didn’t connect, it was pretty conventional in its framework in that it’s a cop drama, and so, you look at what’s coming down the pike on certainly the next two shows, but even the two pilots after that, and those are huge swings in worlds that you haven’t seen on television. I think that’s where we’re really in our wheelhouse.

TheWrap: Do you think pairing “Low Winter Sun” with “Breaking Bad” might have worked to its detriment?

Collier: I think [with “Breaking Bad”] you wipe your forehead and go, “That was exhausting.” And then we gave people another dark drama after it, so I’m not sure we flattered it, but we’ll never know. I will say that, again, most people who run scheduling for a living would say, “That’s still probably your best shot.” …. [But] it was overshadowed by “Breaking Bad” in so many ways, and that’s tough.

Stillerman: And in all honesty, people sort of thought of that show in a way that we never did, which was, “What are we gonna do to replace ‘Breaking Bad’?” And we never, ever thought about “Low Winter Sun” [as a replacement for “Breaking Bad”] … It was never meant to be that. But by proximity and some of the dialogue … you learn from that.