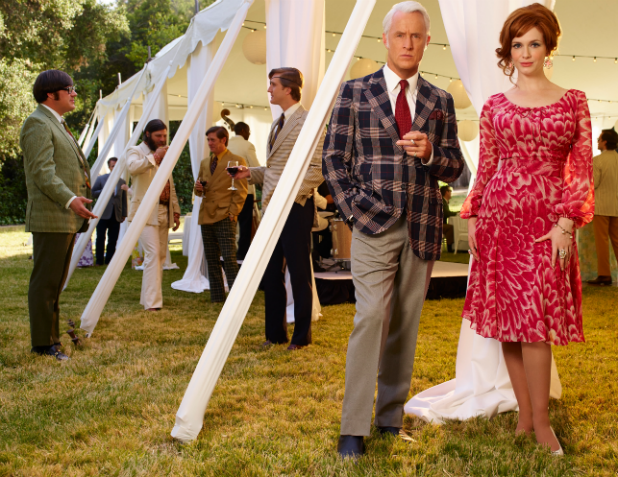 When “Mad Men” returns on Sunday to offer its final seven episodes, there’s far more business than pleasure to tie up for the employees of Sterling Cooper & Partners.

On a series that has always been keen on selling happy endings over actually providing them for its ad-makers, how will fate treat the likes of Don Draper (Jon Hamm), Peggy Olsen (Elizabeth Moss), Roger Sterling (John Slattery) and Joan Harris (Christina Hendricks)?

TheWrap looks at back at where we left the the characters, their business and all future prospects before the show debuts on Sunday at 10 p.m. on AMC.

1. The Dissolution of Don and Megan
The cable network chose to split Matthew Weiner’s final 14 episodes in half, airing the first batch last spring. As of Part 1’s finale, we learned that the second Mrs. Draper (Jessica Pare’s Megan) was finito.

While a touching phone call with Don implied their looming divorce would not be contentious, and that Megan intended to support herself financially, these two don’t give us a Chris-and-Gwyneth vibe. Megan made no headway in booking commercial or TV roles when she moved to Hollywood — in fact, Don was dispatched by her agent to help calm his bride’s insecurities in the face of constant rejection. So, will she really walk off into the series’ sunset an independent woman?

2. Business Affairs
Palace intrigue often pulls focus from the business getting done at Sterling Cooper & Partners. When we last saw him, Roger Sterling had successfully negotiated the absorption of SC&P into McCann-Erickson, as a free standing agency with  Sterling installed as president.

Lou Avery is gone. No more cardigans. Don has, in essence, been fully reinstated to the position he so forcefully squandered then toiled to gain back.

Joan had finally won the financial reward her 5 percent stake in the company promised her (at the cost of her body, easily one of the most controversial storylines ever on the series). On the last finale, the show estimated her payout being $1.5 million in 1969 — which is about $9.5 million today, adjusted for inflation.

Dawn Chambers (Teyonah Parris) is the administrative queen of the office. Long live Dawn Chambers and her key to the Post-Its.

3. The Francis Family
While the show reportedly jumps ahead a few years (which is not uncommon in between seasons of “Mad Men”), the last we knew of Henry Francis’ (Christopher Stanley) upward mobility was his eyeing a shot at Attorney General, as extensively bragged about by his wife Betty (January Jones). We’d expect him in such a position if not higher on the food chain, with his wife lording over whatever suburban enclave she casts her eyes upon.

4. We Need to Talk About Sally
Ever the product of her narcissistic parents, Sally Draper (Kiernan Shipka) grows and regresses in equal measure. Take the satisfaction of last year’s Valentine’s Day episode, wherein her father Don owns up to a byzantine system of lies. She still tells him “I love you,” and she means it. That same season sees Sally horse around with golf clubs in a boarding school fight and break her nose, enraging mother Betty whose empire is built on her own face. One step forward, two steps back. Where will we find her?

All the fantastic characters caught between Draper drama, bedrooms and boardrooms: