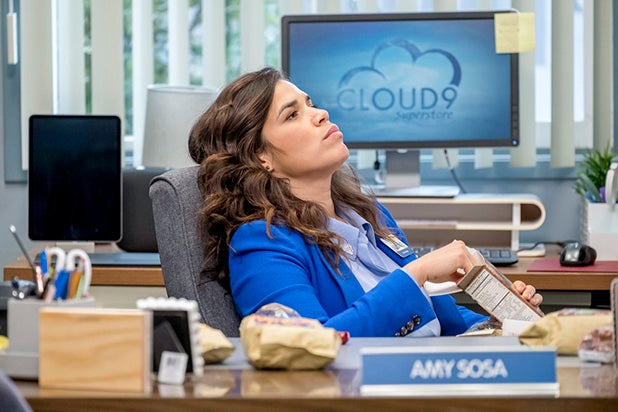 Fear not, “Superstore” fans: Amy (America Ferrera) will get the sendoff she deserves — whenever TV production is able to happen again, at least.

Yeah, we thought that news would put you on Cloud 9.

Executive producers, of which Ferrera is still one (for now), told EW that the slightly shortened Season 5 will not serve as Amy’s farewell. Ferrera will bid the NBC sitcom adieu on the Season 6 premiere.

“It ended up not really being much of a bummer at all because pretty immediately we decided that America would be coming back,” Jonathan Green told Entertainment Weekly. “She really wanted to come back and do the planned finale as our first episode of next season. It was a very quick, mutual decision. There was no back-and-forth about it at all. We were like, ‘This obviously has to happen.’ And so we’ll work around her schedule to make sure that happens, but there was never really a moment where we thought, ‘Oh no we’re not going to be able to give Amy a sendoff.'”

Read more from that conversation here.

Ferrera first announced she was leaving the Universal Television comedy in February. Shortly thereafter, the coronavirus closed down production on basically every TV show in America.

“The last five years on ‘Superstore’ have been some of the most rewarding, enriching and enjoyable years of my career. Producing, directing and acting with this wonderful cast and crew has given me opportunities to grow as a person and storyteller,” Ferrera said in a statement in February. “I’m so grateful to my partners at NBC and Universal Television for the support and belief they have always placed in the show, and I’m most thankful to the brilliant Justin Spitzer for creating the funny, smart and relevant world of ‘Superstore’ and inviting me to be a part of it. As I start the next chapter for my family and career, I wish only the best, and much continued success, to my beloved ‘Superstore’ family.”