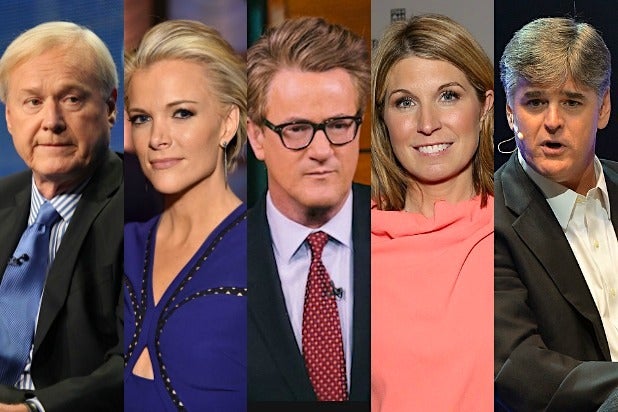 Poor Megyn Kelly. The host of the third hour of NBC’s “Today” show and of summer series “Sunday Night With Megyn Kelly” is America’s least-liked TV media personality, according to TheWrap‘s latest study of Q Scores.

Q Scores are an entertainment industry-used measurement of a celebrity or a brand’s likability based on semi-regular surveys of 25- to 54-year-olds. The higher the Positive Q Score, the more survey respondents marked the individual or company as being among their favorites. The lower — well, just ask Megyn.

Kelly, who jumped from a successful primetime show on Fox News last year to a lucrative new gig at NBC, has struggled a bit at her new network. As TheWrap previously reported, “Megyn Kelly Today” ratings in the key demo were down nearly 30 percent in January compared to 2017, when Tamron Hall and Al Roker co-hosted the “Today” hour.

While she has strong name recognition — her Familiarity score stands at a solid 41 — her Positive Q Score is a dismal 6.

Coming in just ahead of Kelly were three media stars with a Q Score of 8: Chris Matthews, host of MSNBC’s “Hardball” (with a Familiarity score of 34), MSNBC “Morning Joe” co-host Joe Scarborough (Familiarity: 20) and “CBS This Morning” co-host Norah O’Donnell (Familiarity: 13).

It should be noted that in O’Donnell’s case, the Positive Q Score for anyone with a Familiarity rating below 20 should be considered unstable.

TheWrap researched the Q Scores of 30 well-known television newscasters and hosts and ranked them in the gallery posted at the bottom of this story. For the record, we looked into 57 total TV news personalities, but almost half of them did not have Q Scores.

(Some media stars, including Fox News’ Laura Ingraham and CNN’s Don Lemon, have not yet been included in surveys.)