Starz has released the first look photos from its highly-anticipated adaptation of Neil Gaiman‘s “American Gods,” and it shows a brawl about to go down between Ricky Whittle and Pablo Schreiber.

EW has the first photos, which show Whittle’s Shadow and Schreiber’s Mad Sweeney coming to blows over a bet, as Ian McShane, as Shadow’s mysterious employer Mr. Wednesday, looks on.

“It was one of the sets that we were the most excited about and an opportunity to do a tonal landgrab for what we are and what the style of the show will be,” executive producer Bryan Fuller told the magazine. “[Jack’s Crocodile Bar] is a kind of hillbilly chic aesthetic for Shadow’s entrée into the world of the gods.””

The adaptation portrays a war between the old gods of biblical and mythological roots and a new group of gods “reflecting society’s modern love of money, technology, media, celebrity and drugs.” 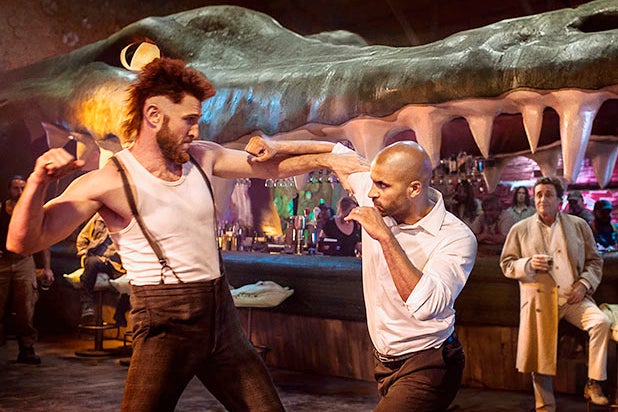