The first “American Gods” season finale cut away briefly from the action between our main characters to a small bus. We see Bilquis (Yetide Badaki) lean her head against the window as it drives into Wisconsin — a few hundred miles away from her current home in Hollywood. She takes a man to the back to do what she’s become famous for and the camera cuts straight to outside the bus, where we see a sign for something called “House on the Rock.”

Those unfamiliar with the “American Gods” novel by Neil Gaiman might be bewildered, since this is the first we’ve heard of such a thing in the inaugural season. However, much like the whitewalker reveal in “Game of Thrones” Season 2, it signifies a certain plot point from the books that fans can look forward to.

Major spoilers ahead from the “American Gods” novel.

The gods depicted all have to adapt to the new world. In their old worlds, they had shrines or traditions that kept them alive and kept their worshipers around. In America, things work a little differently. In the book, Mr. Wednesday (played by Ian McShane on the show) explains that roadside attractions like House on the Rock hold a similar power to shrines. It’s why he chooses it as the meeting place for all the old gods to come up with a plan to defeat the new gods.

“This is a roadside attraction,” he tells Shadow. “One of the finest. Which means it is a place of power.”

In the “American Gods” mythos, power comes from belief. The gods exist primarily because people believed in them, which is why they were also carried over when many of their followers immigrated to America. The same goes for places.

“In other countries, over the years, people recognized the places of power. Sometimes it would be a natural formation, sometimes it would just be a place that was, somehow, special. They knew that something important was happening there, that there was some focusing point, some channel, some window to the Immanent. And so they would build temples or cathedrals, or erect stone circles, or…well, you get the idea.”

The House on the Rock is just one of those places, along with other destinations that pop up along the course of the series.

Luckily for fans, it’s also a real place you can visit. 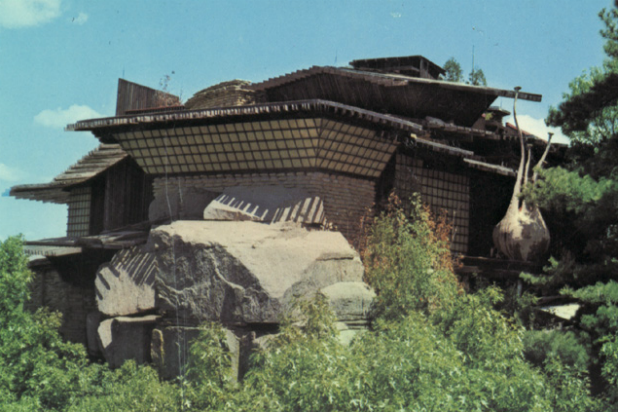 House on the Rock

The place, which is located near the city of Spring Green in southern Wisconsin, was created by Alex Jordan Jr. A story that circulated locally goes that Jordan had a meeting with architect Frank Lloyd Wright, who dismissed him and his designs. Jordan then designed the first part of the house out of spite, although the House on the Rock website says otherwise.

Regardless, the house has taken on a life of its own, with people adding more buildings and attractions. What was once a singular house has become a hodgepodge of architecture and rooms, spanning into multiple buildings and novelties, including an Infinity Room that stretches out around 200 feet from the attraction itself.

As far as tourist traps go, it’s phenomenal. The place contains an inn and a golf course, but also contains one of the most eclectic collections of random objects in the world. To get an idea of what you can expect to see at the House on the Rock, there are a few attractions. There’s “The Streets of Yesterday,” which is a recreation of an early 20th century American town; “The Music of Yesterday,” a collection of automatic music machines; and of course the carousel, which features no horses, but around 269 other animals and thousands of lights. 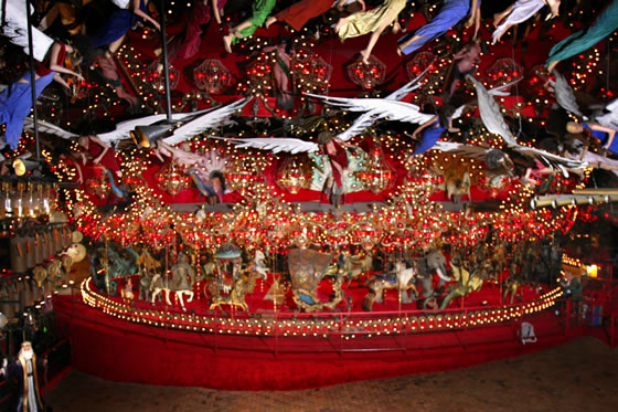 House on the Rock

The carousel plays a big role in Shadow’s visit to the attraction, acting as a gateway into an alternate dimension where the gods meet to discuss the possibility of the upcoming war. In the book, the meeting was how Wednesday sought to convince the others to join his cause and start the war. In the show, however, the war has already begun, as evidenced by the Wednesday and Easter’s actions at the end of episode 8.

Many fans believed the first season would end with the House on the Rock,  and author Neil Gaiman said that was the original plan. However, Gaiman and showrunners Bryan Fuller and Michael Green wanted to do more with the complex setting.

So we’ll get a good look in Season 2. As the final shot states, Bilquis is most likely off to the House on the Rock to meet up with the rest of the crew, although they haven’t arrived yet. In the book, the gods have a tendency to go where they are needed, which includes large gatherings in preparation for battle.

Spoilers: Author Neil Gaiman draws from mythologies across the world to fill out his cast of characters

Warning: Major spoilers ahead for Season 1 of "American Gods."
The Gods of Starz' new series "American Gods" are all immigrants: displaced from their native lands and left to find a place in a world that doesn't always believe they exist. Neil Gaiman's novel is packed full of mythological figures and creatures from Norse, Egyptian, Irish, pagan and Christian histories. To help you out figure them out, we broke down brief histories of the Gods that'll be depicted in Season 1 and the roles they played in their traditional worlds.