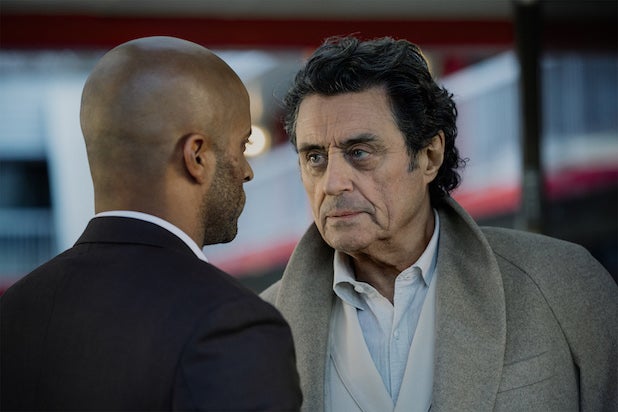 “American Gods” showrunner Jesse Alexander, who took over the Starz drama in February after original showrunners Michael Green and Bryan Fuller exited the series, is no longer working on the show, which is currently in production on Season 2.

The Hollywood Reporter first reported the news, citing sources that say Alexander was asked to stop working on “American Gods” about a month ago and is no longer a writer or showrunner on the TV adaptation of the Neil Gaiman novel of the same name. THR reports he still holds the title of executive producer.

According THR, Alexander “has been asked not to sit in on editing, be involved on set or participate in any other areas of production or postproduction.”

Alexander turned in multiple drafts for the Season 2 finale, but they were all rejected by execs at Starz and Fremantle and production is delayed while actors await a script for the final episode of the season, according to THR.

Season 2, which will be eight episodes, is currently expected to debut sometime in 2019.

Representatives for Alexander, Gaiman and lead actor Ian McShane did not respond to multiple requests for comment by TheWrap.

Also Read: 'American Gods' Will Return to Starz in 2019

Starz declined TheWrap’s request to comment directly on Alexander’s showrunner status with the series, saying in a statement first given to THR, “‘American Gods’ has a deep and complex mythology and a unique visual style that makes this series one of the most ambitious productions on television, and one that we remain committed to delivering for our audience. We are confident that when the fans get their first look at season two in just a few weeks at New York Comic-Con, they will agree it was worth the wait.”

Studio Fremantle, also declining to comment on Alexander, added in their own statement: “We stand by our network partner’s statement and share in their confidence that season two will exceed expectations. Our cast and crew are extremely passionate about the show and have delivered something that remains loyal to the source material and true to the creative vision of Neil Gaiman. We think fans will feel the same when we share a first look at New York Comic-Con in a few weeks.”

Starz still hasn’t given a straight answer about why the duo left the series, with network chief Chris Albrecht saying at the Television Critics Association press tour in January, “They were not fired nor did they quit.”

Along with the showrunner shakeup, “American Gods” has seen casting changes going into its sophomore year, with Gillian Anderson (who played Media) replaced by Kahyun Kim (who will play New Media), and the additions of Dean Winters as Mr. Town, who works with Mr. World (Crispin Glover) to find out what Shadow (Ricky Whittle) knows about Mr. Wednesday’s (Ian McShane) plan and Devery Jacobs as Sam Black Crow, a college student who is spiritually cynical for someone who claims to believe in so much. She lives life confidently, selling the chainsaw art she carves by the roadside for extra money.

The first season of "American Gods" was full of strange moments as gods both ancient and modern revealed themselves as living among mortals. But after eight episodes, there are plenty of dangling threads we're still waiting to see completed. Here are eight questions we want "American Gods" to answer when it comes back in Season 2.