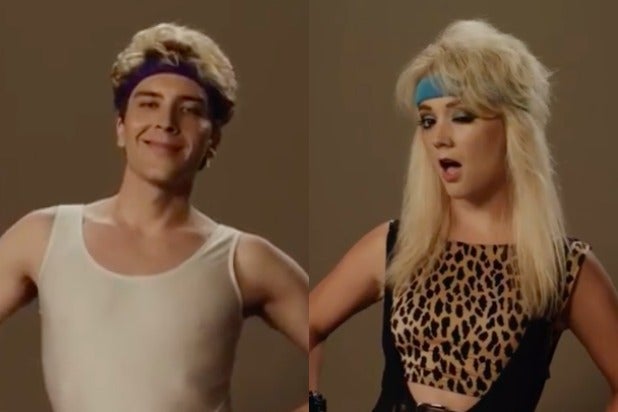 Creator Ryan Murphy announced the “AHS” alums’ return to the FX franchise in a set of videos posted to Instagram Thursday, which revealed the casting lineup for “American Horror Story: 1984” — and some killer ’80s hair and fashion.

“To celebrate the first day of filming the NINTH Season of AMERICAN HORROR STORY, here’s the official 1984 cast announcement along with some amazing 80s lewks. Enjoy!” Murphy wrote.

Absent from the promos was “AHS” staple Sarah Paulson, who we learned earlier this week won’t be starring on Season 9 of “American Horror Story.” It is yet-to-be-determined if/how she’ll show up this season, which premieres Sept. 18.

In classic “AHS” fashion, we don’t know much about “1984,” except that the theme is ’80s slasher films, which is very clear with the costumes and camp setting in the promos below.

“I will tell you nothing, except that I think it’s awesome,” executive producer Tim Minear told TheWrap in May. “I think it’s gonna be really scary but a lot of fun, like it always is. And that if you have a taste for ’80s horror, you’re in for a treat.”

Watch the promos below.

To celebrate the first day of filming the NINTH Season of AMERICAN HORROR STORY, here's the official 1984 cast announcement along with some amazing 80s lewks. Enjoy!