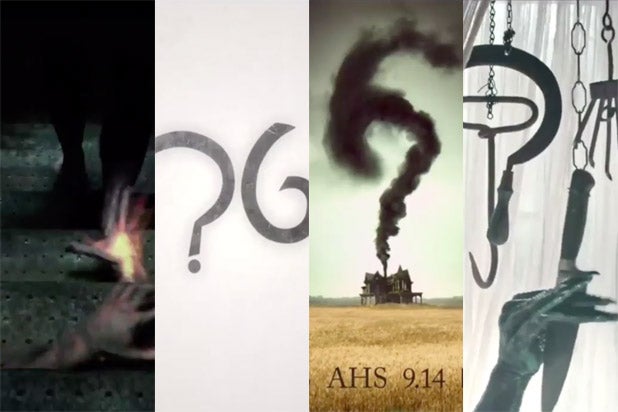 (Spoiler alert: Please do not read on if you haven’t watched the season premiere of “American Horror Story 6”)

“American Horror Story” has been known to leave viewers completely confused after a new episode airs, but the premiere of Season 6 might have set a new record for keeping fans in the dark.

After a deliberately confusing ad campaign that came with the tease warning that only one of the promos was actually connected to this season’s theme, dozens of theories spawned on “AHS” fan boards. Wednesday night, fans gathered to finally get answers to their two biggest questions: what is this season’s title, and when are we going to see Evan Peters?

As you can see from the tweets below, they remained thoroughly perplexed.

Almost 20 minutes in and I still don’t know wtf is the theme and what’s even going on. #AHS6 pic.twitter.com/nSbn2LCyJh

Us: “Where is Evan?” “What’s the theme?” “How are you going end the episode like that?”
Writers: #AHS6 pic.twitter.com/MkFdnqU1Aa

#AHS6: No theme song, No preview of next episode, No Evan Peters or Jessica Lange

Instead, “AHS” just gave its fans even more questions by completely turning its formula upside down. Instead of a creepy, evocative opening credits sequence, the show opened with the promise that what they were about to see was “inspired by true events” before presenting an episode that starred Sarah Paulson and Cuba Gooding, Jr. in a show-within-a-show format.

This season seemed to be presented as a paranormal documentary series called “My Roanoke Nightmare,” with Paulson and Gooding, Jr. performing a dramatic reenactment of terrifying events recounted in interview by the people who supposedly experienced them, played by Lily Rabe and Andre Holland.

I guess this @AHSFX is in an alternate world where Marcia Clark & and Oj Simpson fall in love after the trail #AHS6 pic.twitter.com/Szdw3tj13J

“the following story is inspired by true events” #AHS6 pic.twitter.com/Bw7I3U5Vtr

Unfortunately for Evan Peters fangirls, there was no sign of the man formerly known as Tate Langdon in this episode, nor was there any appearance by Lady Gaga, who teased in a radio interview that she would return to “AHS” this year. We did however, get appearances by Angela Bassett, who played Gooding’s jaded, sarcastic ex-cop sister, and Kathy Bates, who had a quick appearance as a mysterious woman that Paulson hits with her car and then follows into the forest.

Y’all shoulda known Kathy bates was invincible when they cut off her head in season 2 and she kept talking #AHS6 pic.twitter.com/kKlYnze2kl

So to count, this episode gave us raining teeth, a hot tub attack, breathing ground, a strange forest cult with torches, and dead pigs. It’s also somehow connected to the Roanoke colony that mysteriously disappeared in the 16th century, and if Ryan Murphy‘s promises are any indication, it will start tying all the previous seasons together. It seems that “American Horror Story: My Roanoke Nightmare” — let’s just call it that — is planning on juggling a lot of questions from the get-go this season.