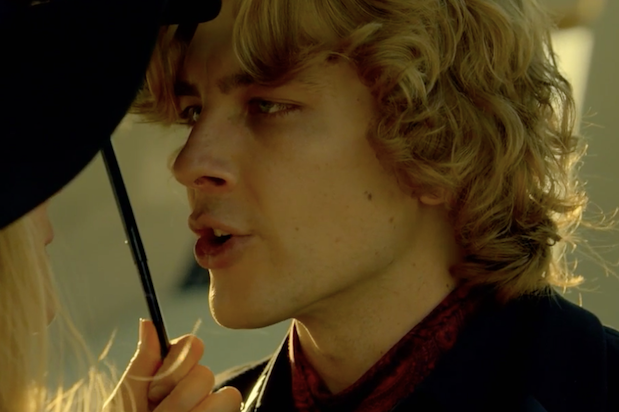 It looks like “American Horror Story: Apocalypse” is going to end with a bang tonight — literally. But, really, what did you expect from a season all about the end of the world?

Yes, we now know Michael Langdon’s plan — which appears to be to watch the world and everything in it, including those pesky witches, go up in flames — is slowly coming to fruition, as tonight is the Season 8 finale.

TheWrap spoke with Cody Fern after Episode 808, “Sojourn,” to get as many details as we possibly could about how his on-screen alter ego — the Antichrist himself — plans to duke it out with Supreme Cordelia Goode (Sarah Paulson) and her coven on the finale of Ryan Murphy’s “Apocalypse.” And what we learned is it’s gonna be a big and messy showdown.

Also Read: 'AHS: Apocalypse' - The Biggest Questions We Have After That Insane Eighth Episode

“What I can say is, the final episode — Ryan is setting up a battle royale,” Fern told TheWrap in an interview earlier this month. “We’ve spent all season doing that. And nobody does a battle royale like Ryan [Murphy] does a battle royale. And there will be a lot of surprises and a lot of twists. I think that the last episode is thrilling, and tragic, and beautiful, and shocking. And it’s many things, and it was many things to all of us [shooting it]. It was a very hard episode to shoot emotionally and I can’t wait for the world to see it. But yeah there are many surprises in store.”

When we asked if the series might return to Murder House — again — this season, Fern said, “Never say never with Ryan. That’s it [laugh].”

See more from TheWrap‘s interview with Fern below, during which he told us what he thinks Michael’s plan is and how he’s definitely underestimating Mallory — the supposed rising supreme witch, played by Billie Lourd — in all this.

TheWrap: What can you tell us about how Michael gets from where we left off in last night’s episode to where we are when we — presumably — return to the Outpost timeline in the future?

Cody Fern: We’re under such tight lock down with spoilers so I can’t say much. But, what I can share and what I think is important is one of the takeaways from last night’s episode — and full disclosure: I haven’t seen it yet, but you know I was in it for a while [laughs] — is that we’ve seen Michael in the Outpost, Outpost 3, so post-apocalypse. And we’re ramping up to how he got to the apocalypse. And what we have come to understand is that, essentially, Michael has an internal purpose, one that’s directed through him by Satan himself, but that he doesn’t necessarily understand it or how to achieve it. And that this divine purpose, we could call it, is going about, you know, bringing itself to fruition as was prophesied.

Now for Michael, what’s important is that what we’ve seen is Cordelia has burned Mead (Kathy Bates), and the warlocks — but it’s mainly Mead that Michael cares about. And the promise that Michael makes to Cordelia, that “I will find every single one of you and I will kill you,” is important. Because what we now have and what we should now understand is that, the Armageddon is not some inner-specific mission of Michael’s, but rather it’s a very personal mission directed at Cordelia.

And as we’ve seen in Outpost 3, when Cordelia comes and says, “find our sisters,” and Michael is not surprised that she’s here and he says, “You’re going to wish you were all still dead when I’m finished with you.” And there is unfinished business here, and that that personalization of what the Armageddon is is going to be important moving forward when we get into Episode 9 and then Episode 10.

So how do the events in Episode 8 set up where we are going from here?

Now the dynamic has shifted. It’s no longer just about stopping Michael from ending the world, but it’s the understanding that, with a prophesy, sometimes it’s you change one thing, but that could lead to the change of events that causes the thing that you would find to stop. And I think that’s the case in Episode 8. By burning Mead and taking away Michael’s righthand woman, [Cordelia] leads to a chain of events that causes Michael to seek out the Satanists to ultimately help him to moving into ending the world. And we’re going to get back to Outpost 3 and I’m going to get to wear the wig again!

Should Michael be more afraid of Cordelia or Mallory — who appears to be the rising supreme —  at this point?

I think Michael’s afraid of what he doesn’t know. And that’s not to get that, while we’re seeing Mallory developing certain powers, Michael’s unaware of those. He meets Mallory for the first time in Outpost 3 and that first interaction that he’s had with her and then moments later everybody is dead and the witches are coming into the outpost and here we go. And Cordelia has revived Mallory, but he doesn’t have an understanding of who Mallory is. He doesn’t know what Mallory’s powers are. He just knows she’s a very powerful witch. Because in his mind, he’s hell-bent on Cordelia and that’s one of his flaws at this time. He’s so focused on destroying Cordelia and making Cordelia suffer for what she’s done to him, that he doesn’t see what’s right in front of him.

TheWrap: There have already been two more seasons of “AHS” ordered. Would you be in them if Ryan asked you back?

If Ryan asked me to do anything, I would walk through fire for him. But also I wouldn’t know what would come next.