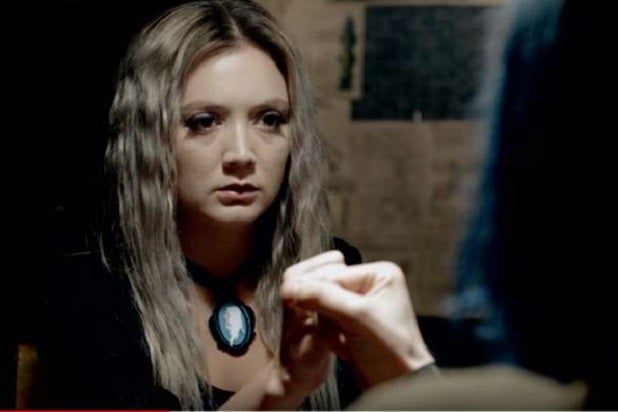 Episode 8 of “American Horror Story: Cult,” “Winter of Our Discontent,” threw some serious curve balls at fans of the series. Throughout the latest episode, plenty were asking themselves just what the hell was going on as clown cult leader Kai Anderson (Evan Peters) became weirder than ever before.

The driving force of the episode was the growing tension between Kai and the women in the cult. After Kai got one follower, Meadow (Leslie Grossman), to stage a fake assassination attempt to get him national spotlight, he apparently turned the cult into a male-centric endeavor. His sister, Winter (Billie Lourd), and followers Ivy (Alison Pill) and Beverly (Adina Porter) were feeling marginalized, and it made them want to strike back. Last week, they killed Harrison (Billy Eichner) as part of their retaliation.

But Winter still trusts Kai, and she started the episode trying to talk the others down from turning on him. She told a story about how Kai saved her life two years earlier, and started down his murderous path. But fans aren’t really buying Kai’s supposedly altruistic origins.

It’s so weird seeing Kai actually save people’s lives…???? So what on earth happened in those couple of years to make him so crazy? #ahscult pic.twitter.com/ZSMzeoRTRn

That was it?? That was winter's sob story for kai's behavior???#AHSCult pic.twitter.com/kwKUaJZNqs

The real “WTF” moment came a little later, though. Doing their “pinky power” thing, in which the Anderson kids hold each other at the pinky finger and agree never to lie to one another, Kai told Winter about his plans for his movement’s future — and the next generation.

When Winter asked if Kai was suggesting incest, he explained that Samuels (Colton Haynes) would be the third party in their attempt to make a “messiah baby.”

Fans were shocked and confused, to say the least.

Is Kai…. wanting a baby? With his baby sister??? #AHSCult pic.twitter.com/hu5KVAFiZt

WHAT KIND OF SICK SHIT IS HAPPENING #AHSCult

Kai: “You will be the mother of our Messiah baby.” #AHSCult
Winter: pic.twitter.com/CKA94jaTdZ

“Our family?” … “The one we’re going to make” #AHSCult pic.twitter.com/esfuG4pAhU

No, don't you bring All-4-One into this, Kai! They are too good and that song is too pure for your messed up shenanigans! ????#AHSCult

While people were having a hard time dealing with Kai’s request (or the part of the episode where he, Winter and Samuels tried and failed to enact the “ritual”), they were happy about one thing. Ally (Sarah Paulson) is back, and she’s apparently gotten over her “being afraid of everything and screaming constantly” problem. She even invited Kai to dinner for a parley.

I have a feeling that manwich is made of actual man. #AHSCult

So ally will no longer be screaming #AHSCult

Little did fans know there was one more big “WTF” moment coming. The episode ended with another powerful reveal — that Ally was the newest member of the clown cult, much to wife Ivy’s shock.

Fans were just as shook by the revelation as Ivy.

YALL ALLY IS A PART OF IF I AM SCREAMING #AHSCult

Ally is about to get all of them … join them , learn the game, then take them out #AHSCult pic.twitter.com/6DWTJTzN5M

The ending of this weeks #AHSCult got me like pic.twitter.com/pLP8EDFIWi

With three episodes left in “American Horror Story: Cult,” one can’t help but wonder how the series can get much crazier, or more shocking, than it already is. Fans are ready to see it try, though.

Alliances are fraying in the murder cult

When "American Horror Story: Cult," kicked off on Sept. 5, fans immediately started speculating that some of the weirdness between the show's characters could be a clown cult conspiracy. After eight episodes most of their suspicions have been confirmed, but now members are turning against each other, and people who were in are trying to find way s to take the cult down. Warning: Spoilers!