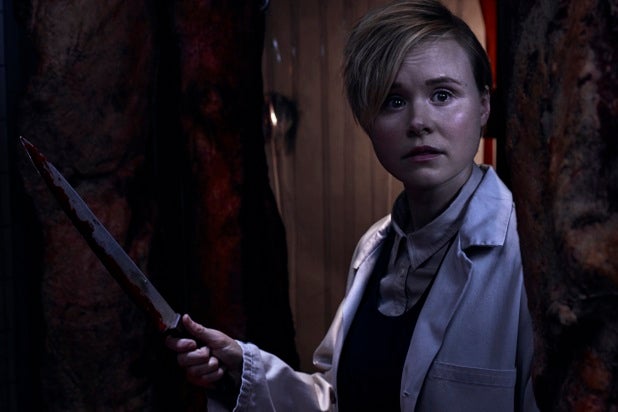 Even when they think you know what’s going on in “American Horror Story: Cult,” the show manages to throw some ridiculous twists at fans.

First, “American Horror Story: Cult” opened with a shooting at a campaign rally for secret cult leader Kai Anderson (Evan Peterson). And it looked like Ally (Sarah Paulson) was the shooter.

My reaction when I find out Ally is the shooter at the beginning of the episode #AHSCult pic.twitter.com/t8EzaKCO1c

That was a shocker for fans at the start, but the episode then dialed back in time to another major event: Ally rescuing Meadow (Leslie Grossman) from the cult. Finally, it seemed, Ally had a friend who could help her deal with this whole murder clown thing.

I actually feel bad for Meadow she just wants to feel loved like someone cares but sadly…Kai only loves himself ???? #AHSCULT #AHScult

Ally and meadow bout to tag team them all #AHSCult pic.twitter.com/XmopCxAl1K

Also Read: Every 'American Horror Story: Cult' Character, Ranked by How Likely It Is That They're a Murderous Clown (Photos)

But plenty of fans were also immediately suspicious. They’d been burned by seemingly non-cult characters before. Repeatedly.

For some reason I feel like Meadow isn't telling the whole truth ???? #AHSCULT

I don’t think Ally can be that gullible. This story sounds fishy #AHSCULT

I’m still trying to figure out why they didn’t just kill Meadow instead of beating around the bush multiple times. Issa scam ????????‍♀️ #AHSCult

Also Read: 'American Horror Story: Cult' Fans Are Finally Putting It All Together

This episode also saw the introduction of “American Horror Story” regular Mare Winningham, who popped up as Sally, a woman who sees right through Kai’s brand of fear-mongering. Fans were pretty delighted to see her take him apart in public during a city counsel debate.

#AHSCult she just signed her own death warrant

Mare Winningham is killing it!!! Kai does not like being challenged. THIS IS GONNA BE SO GOOD!! #ahscult

But the heart of the plot of most of “American Horror Story: Cult” has been Ally and her relationship with her wife, Ivy (Alison Pill). This episode featured quite a bit about Ivy’s induction into the cult, and her resentment toward Ally. Turns out, Ivy really was gaslighting Ally with her clown pals, as lots of fans suspected.

In general, though, fans had some questions about the pair’s choices.

So Ivy teamed up with Kai to help drive Ally crazy and to hopefully run off with Ozy #AHSCult pic.twitter.com/L68UV24Y06

ivy u ever heard of divorce instead of murder hun #AHSCult

As many fans expected, Sally wasn’t long for the show — but most were pretty annoyed with Ally’s usual “freak out and shutdown” response in the face of danger.

I really like this character, so she'll definitely be dead by the end of the episode. #AHSCult

Ally sees that Meadow was telling the truth #AHSCult pic.twitter.com/fM8H623pi1

Sally standing up to Kai was great, and plenty of people continue to be irritated with Ivy, but it was the episode’s big ending twist that blew the most minds.

I KNEW THERE WAS A PLAN WITH MEADOW !! #AHSCult

OMGGG. WHAT JUST HAPPENED??? IT WAS ALL PLANNED OUT #AHSCult pic.twitter.com/KKCQ33ZifF

There were still a few things fans were wondering about, though. News circulated last week that this episode of “American Horror Story: Cult” had had its shooting scenes recut in response to the mass shooting that took place in Las Vegas last week. To many, “AHS” still seemed pretty graphic.

Me trying to figure out if this is what they kept in then what did they cut out ???? #AHSCult pic.twitter.com/B4SCz0z6jH

And one other question still lingered on fans’ minds:

Alliances are fraying in the murder cult

When "American Horror Story: Cult," kicked off on Sept. 5, fans immediately started speculating that some of the weirdness between the show's characters could be a clown cult conspiracy. After eight episodes most of their suspicions have been confirmed, but now members are turning against each other, and people who were in are trying to find way s to take the cult down. Warning: Spoilers!