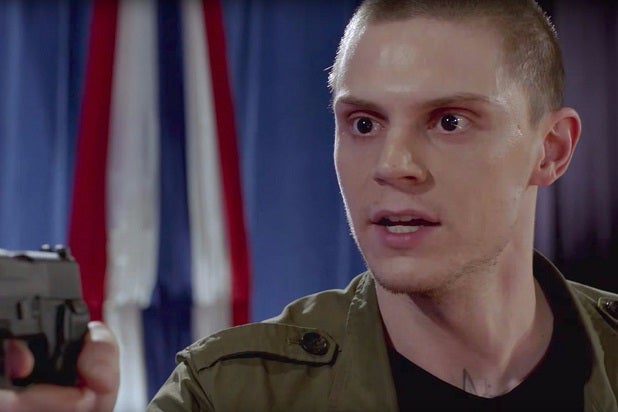 “American Horror Story: Cult” has been one of the twistier seasons of the show, and it saves one of the biggest bombshells for last.

The final episode of the show sees the conflict between cult leader Kai Anderson (Evan Peters) and Ally Mayfair-Richards (Sarah Paulson) come to a head. After turning Kai in to the FBI, Ally decided to make a Senate bid by leveraging her celebrity for surviving the cult. But an enraged Kai managed to escape prison to threaten Ally live at a senatorial debate.

As it turns out, Ally was springing a trap on Kai. She’d convinced Kai’s guard at the prison to help him escape, but leave him vulnerable. Then, on live TV, Ally showed her strength by mocking Kai, before Beverly (Adina Porter) got her revenge and killed him. The move solidified Ally’s Senate win.

The final moments of the episode close on Ally looking in a mirror as she pulls a black hood over her head. It’s a reference to what “American Horror Story: Cult” revealed in Episode 7 — Ally is a member of SCUM, the Society for Cutting Up Men. The cult, started by Valerie Solanas in the 1960s, was actually responsible for the Zodiac killings in San Francisco.

The reveal recontextualizes a huge amount of what we’ve seen in “American Horror Story: Cult” so far. We found out in Episode 10, “Charles (Manson) in Charge,” that Bebe Babbitt (Frances Conroy), one of Valerie’s cult members, was actually responsible for starting Kai on the path to starting his cult. She served as his therapist, and convinced him to use his charisma to gather a group of people, working toward eventually igniting the fury of women around the world to rise up against men.

As part of Bebe’s plan, Kai turned against the women in his cult, ostracizing them and getting them to fight back. Bebe met up with Beverly, Ivy (Alison Pill) and Winter (Billie Lourd) and told them all about SCUM, trying to get them to turn on Kai. But instead of following through on what Bebe wanted, Kai turned against Bebe and the other women, raising a small army of men to help him take over the country.

Meanwhile, Ally, who was committed to a mental hospital in the aftermath of the shooting at Kai’s rally, was recruited by the FBI to spy on Kai’s cult. She got in with Kai by claiming he was her son’s father. When Bebe showed up to kill Kai after he betrayed her, it was Ally who shot Bebe and saved his life.

The reveal at the end of the show suggests that at some point, Ally joined up with Bebe’s cause. It’s possible that after Ally and Beverly escaped Kai’s cult, Beverly brought her into the SCUM fold. But given that Bebe tried to execute an elaborate plan using Kai’s cult and the women already in it to take SCUM nationwide, it seems more likely that the intended read of “American Horror Story: Cult” that Ally was part of Bebe’s plot from much earlier. Maybe most or all of what we’ve seen of Ally dealing with Kai’s cult has been Bebe’s plan all along, to catapult a woman to the national stage who could destroy the two-party electoral system and, finally, lead a revolt against men.

Also Read: Every 'American Horror Story: Cult' Character, Ranked by How Likely It Is That They're a Murderous Clown (Photos)

Some elements of the ending of “American Horror Story: Cult” is open to interpretation, but it’s clear that Ally is now a U.S. Senator — and she’s ready to lead a cult of her own.