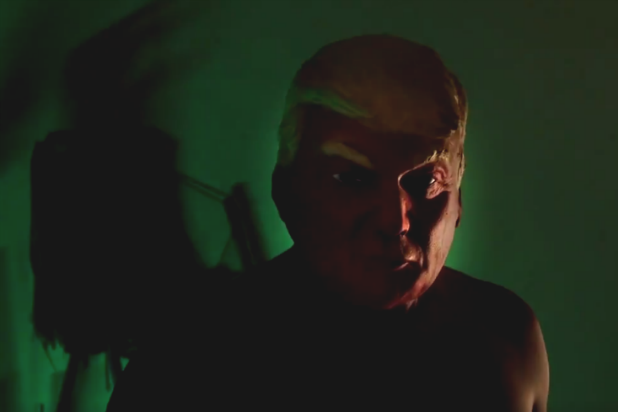 Audiences got more hints about how “American Horror Story: Cult” utilizes the 2016 presidential election on Monday when the show’s official Twitter account released the opening credits.

The sequence is in the same vein as previous ones — complete with the theme and shots of strange and vague imagery — but with one exception: the Donald Trump and Hillary Clinton masks.

Throughout the credits, two characters put on the masks. In one shot, a man puts on a Trump mask in front of a mirror and then looks at the camera. The shot is immediately followed by a brief glimpse of a George Washington figurine. Later, a Clinton mask flashes into shot.

Other disturbing images include bees (which have prominently featured in previous teasers), bugs crawling out of holes in bodies, and people in hoods carrying coffins in the woods.

Producer Alexis Martin Woodall said at the Television Critics Association press tour this summer that “Cult” uses the election as a jumping off point to discuss paranoia and the state of the world during the campaign and after the election.

“I would say honestly that when Ryan [Murphy] had made the announcement originally that the season would deal with Trump, it’s more about what’s going on in the world around us,” she explained. “We talk about the streak of paranoia, and a lot of it launches from that.”

Details are still being kept under wraps for the upcoming season.

You can watch the full opening credit sequence below.

Watch it begin. Witness the opening credits for #AHSCult. pic.twitter.com/7X3Cy9W7DV