Dylan McDermott came back home last night for one hell of a tearjerker.

The “American Horror Story” alum returned to the franchise for the eagerly anticipated sixth episode of “AHS: Apocalypse” — the most fitting of all times for the Season 1 star to rejoin the cast, as the episode was called “Return to Murder House,” and obviously packed with references to the series’ first season, “Murder House.”

And McDermott tells TheWrap he was happy to be “in on the joke” this time, as fans have continued to poke fun at that particular moment from the first season of the Ryan Murphy-created series over the last seven years.

“Well, you know I tweeted today, or last night something like, ‘So great coming back to ‘American Horror Story. Thank you for all your love. It was a real tearjerker,'” McDermott told TheWrap, laughing, in an interview Thursday. (See the tweet below).

Thank you for all the love. It was great being back on AMERICAN HORROR STORY! What a Tear Jerker! @AHSFX @MrRPMurphy

The scene where McDermott’s character cries while um, taking care of business, in his den in the haunted mansion is just one of the many amazing “Murder House” moments from Wednesday’s episode, which also saw the returns of franchise alums Connie Britton and Jessica Lange, reprising their roles as Ben’s wife Vivien and their neighbor Constance Langdon, respectively.

And then there was Taissa Farmiga, Evan Peters and Frances Conroy — all of whom are already playing one character this season — coming back to their “Murder House” roots as well, for the origin story of Michael Langdon (Cody Fern).

Read TheWrap‘s full interview with McDermott below, in which he also teases if he, Britton and Lange will be coming back to the “Apocalypse” before the 10-episode season wraps next month.

The Wrap: How did Ryan get you to come back this season?

Dylan McDermott: It was the Vanity Fair party. That’s what it was. The Vanity Fair party for the Oscars. And I saw Ryan and we started talking and he said, “I want you to come back to ‘American Horror Story.’ I have this thing planned.” And I was like, “Yeah, I’m there in a second. I love that show. I love you. Whatever you need, I’m there.”

Do you know how he got Connie and Jessica to come back, too?

I don’t know exactly what happened there — but usually when Ryan asks, you say yes.

Also Read: 'AHS: Apocalypse' - The Biggest Questions We Have After 'Return to Murder House' 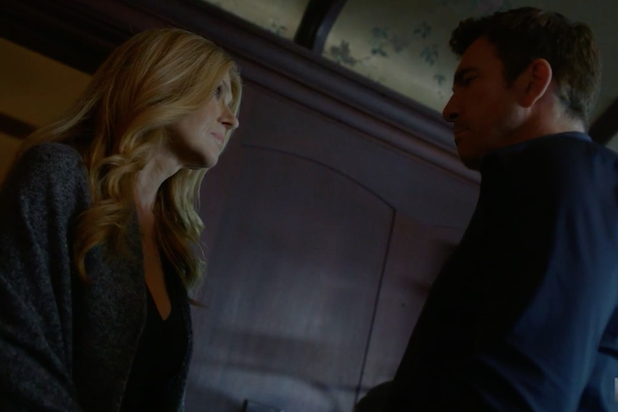 How did it feel to be back in the “Murder House” with everyone from Season 1 after so much time away from the series?

Completely surreal because it’s the same place where we filmed the pilot. It’s been seven years right? It was the same set and some of the crew members were the same. Makeup was the same and some of the camera department and the sound department [was the same]. So it was very surreal, like we never left. And when Connie came it was very emotional, because we spent a lot of time together. And then with Jessica there, it was like we never, never left. And it was really beautiful because there are so many heartfelt memories that we have there of working long hours and creating this new kind of television that Ryan made. Because before then, if you remember, you know you were locked in for seven years with these shows. And Ryan was really the first person to say, “Come for a season. Don’t worry about it.” And that’s how he attracts such amazing actors.

Did you feel a lot of pressure with the episode being the most eagerly anticipated of the season, with fans very excited to come back to “Murder House”?

Yeah, yeah, I think everybody felt the pressure, and the fact that Sarah directed it was the best. Because Sarah speaks our language. She’s an actor, she’s talented. I’m so glad it was her and I thought she did an amazing job. And Ryan came to the set and it really was handled so beautifully. It didn’t feel like we were jumping any hurdles, it felt like we were just coming home.

Also Read: 'AHS: Apocalypse': Anton LaVey, the 'Black Pope' of the Church of Satan, Was a Real Person

Well, you know I tweeted today, or last night something like, ‘So great coming back to ‘American Horror Story. Thank you for all your love. It was a real tear jerker (laughs). So, you know, I was totally in on the joke, I get the joke. I think it’s hilarious that I’m a ghost and I spend my days masturbating and crying out that window. That’s my torture. I do it every day, at a certain time of day, out the window. And then he says, ‘I don’t mind the other part, it’s just the crying I can do without.’ Hilarious. (laughs)”

How many times did you film that scene?

Oh man, that was like at least seven hours (jokingly). Yeah, funny, right? 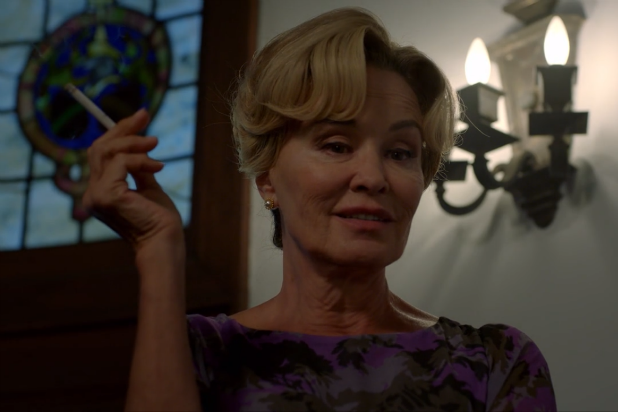 What do you think of the Michael Langdon original story?

You know, it’s so terrifying this spawn of Satan. This kid who is so charismatic, it’s so frightening because to the world he’s beautiful. And, you know, people are so caught up in appearances and what things look like, but underneath you have this dark, dark world. So I think it’s actually genius. But I find it so frightening. To me it’s the most frightening, like “Rosemary’s Baby.” That stuff, cause it feels real, like it could happen — that Satan is real and there is this army of darkness out there. So, I thought that was really — in doing the show that kind of scared me a little bit. Because that stuff is real, it does exist. And to try to help this kid that was Ben’s plight really. And he’s the worst psychiatrist in the world, because he helps him! (laughs) And, in that, he really helps no one, it’s so sad. (laughs)

Are you or Connie or Jessica coming back for any more episodes this season? I know they are shooting the finale now.

You never know with Ryan. I don’t think so. I think this was it. I didn’t see the episode, so I have to watch it.

Do you have any idea what’s in store for the finale?

Geez, I really don’t. There is a lot of secrecy around it. The scripts are sent to the house, they aren’t emailed. So I don’t know, to answer your question. I don’t think anybody knows until Ryan and [co-creator] Brad [Falchuk] sign off on it.

Would you come back to “American Horror Story” in general? Two more seasons have already been ordered.

You know, I’m doing “The Politician” right now — Ryan’s newest show at Netflix. You know, I’m a Ryan Murphy fan for life, so whatever he asks me to do, I’ll do. If he says, “I want you to come back to ‘American Horror Story,” I’m there. I think he’s the most talented producer in Hollywood. And I just think that he has his pulse on pop culture like no one does. And the fact that I’m part of his troupe is incredible.